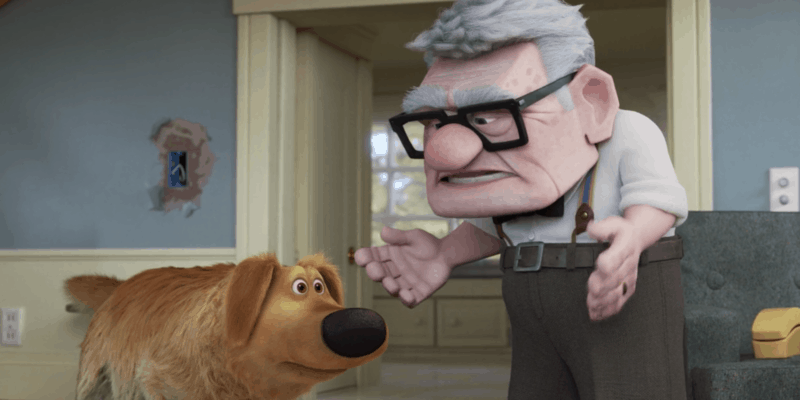 The late Ed Asner — a seven-time Emmy Award winner famous for his roles as Santa Claus in Will Ferrell’s Elf (2003), Lou Grant in The Mary Tyler Moore Show (1970-1977), and Bart Jason in El Dorado (1966) — made a surprise reprisal of his most iconic role, Carl Frederickson in Disney-Pixar’s Up (2009), in the Disney+ Original Dug Days series, now streaming.

The series of shorts featuring Dug the dog and Asner’s Carl debuted today, September 1, 2021, and is being heavily promoted on the Disney+ platform.

It was not widely known that Asner — who passed away at age 91 over the weekend — would be doing the voice of Carl in Dug Days, and it is an especially fun treat for fans of the actor and activist, who became well-known for his work with The Ed Asner Family Center later in life.

The series is officially described as:

Pixar Animation Studios’ “Dug Days” is a series of shorts that follows the humorous misadventures of Dug, the loveable dog from Disney and Pixar’s “Up.” Each short features a everyday events that occur in Dug’s backyard, all through the exciting (and slightly distorted) eyes of our favorite talking dog. Written and directed by Academy Award nominee and Emmy Award winner Bob Peterson.

There are five shorts currently streaming.

Disney-Pixar fans can also watch Up streaming anytime on the Disney+ streaming service. The official description of the popular Pixar film reads:

Carl Frederickson, a retired balloon salesman, is part rascal, part dreamer and ready for his last chance at high-flying excitement. Tying thousands of balloons to his house, Carl sets off to see the lost world of his childhood dreams. Unbeknownst to Carl, Russell, an overeager 8-year-old Wilderness Explorer who has never ventured beyond his backyard, is in the wrong place at the wrong time…Carl’s front porch. The world’s most unlikely duo reach new heights and meet fantastic friends like Dug, a dog with a special collar that allows him to speak and Kevin, a rare 13-foot tall flightless bird. Stuck together in the wilds of the jungle, Carl realizes that sometimes life’s biggest adventures aren’t the ones you set out to have.

Have you watched Dug Days yet?