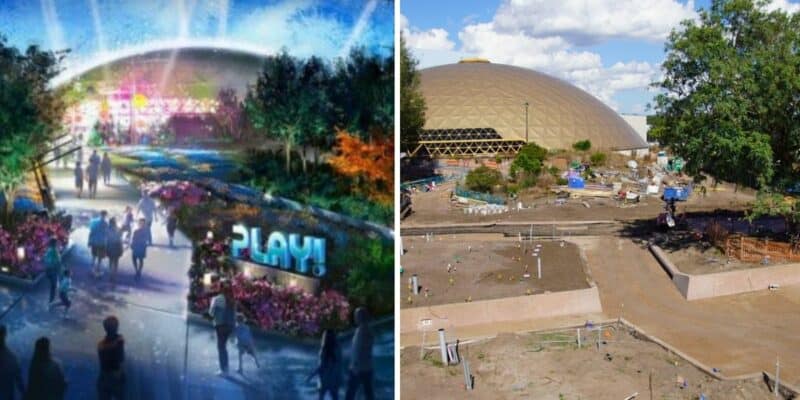 In 2019, the D23 Expo had a plethora of exciting announcements for Disney fans, one of those being an announcement that EPCOT would be receiving a complete overhaul.

EPCOT’s Future World was said to receive a massive change where the front half of the Park would turn into three distinct neighborhoods: World Nature, World Celebration, and World Discovery. Aside from all of the changes that would come to Future World, the U.K. pavilion was set to expand into Cherry Tree Lane with a Mary Poppins attraction. Spaceship Earth was set to undergo a refurbishment.

Then, the unexpected happened. The pandemic shut down Walt Disney World Resort, and with it, many projects were put on hold. Spaceship Earth’s refurbishment has been pushed back to an unknown date, and we have not seen or heard of any further developments regarding Cherry Tree Lane. We have noticed that the mention of the expansion has been edited out of specific press releases; however, it is still listed in others. There has been no official statement from Disney that the project will not move forward, eventually.

In World Discovery, Guests were expecting to see the PLAY! pavilion come to life. As Disney noted:

The PLAY! pavilion will open in time for the 50th anniversary of Walt Disney World. In this digital metropolis, you’ll discover an interactive city bursting with games, activities and experiences that connect you with friends, family and beloved Disney characters – both real and virtual – like never before. As part of this new pavilion, you’ll have the chance to help legendary fashion icon Edna Mode on her quest to rid the world of uninspired style, or make a splash competing in a water-balloon fight hosted by Huey, Dewey, Louie and Webby.

All the Details on EPCOT Reimagined: What’s Happening, What’s Not, and What We Know So Far

Of course, we know that the pavilion will not open for the 50th as it is still under heavy construction. Photographer (@bioreconstruct) shared a photo of the ongoing construction of the PLAY! pavilion’s construction, and it seems to be in the earlier stages of development as the majority of the photo shows piping and dirt.

Disney’s current description of the World Discovery no longer mentions the PLAY! pavilion, and now that we can see the progress in the area, it seems that the fate of the pavilion remains unknown. Disney has not yet noted formally that the pavilion has been scrapped, but it is interesting to see it removed from the site in certain areas. On a recent visit to EPCOT, we also saw the PLAY! pavilion concept art on display near construction walls.

We have, however, seen some significant developments in EPCOT over the past few weeks! Space 220, also in World Discovery, has opened, the Creations Shop and Club Cool are also now available for Guests. On top of that, the France pavilion expansion is complete and will be officially revealed on October 1 alongside Remy’s Ratatouille Adventure.

Stay tuned to Inside the Magic as we continue to get you all of the latest information regarding EPCOT’s transformation!