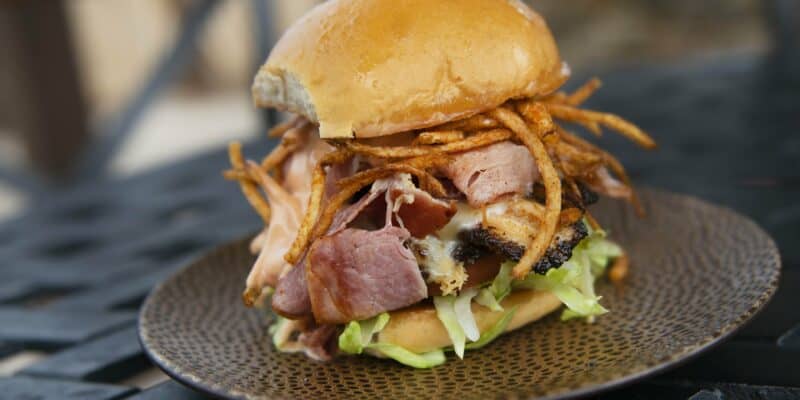 Disney World is constantly evolving and finding more ways to be inclusive and celebrate their Guests and Cast Members’ cultures. With people traveling around the world to visit the Most Magical Place on Earth, Disney has a wider variety of cultures that they can explore and highlight to show everyone that they are represented at Walt Disney World.

This month, Disney is celebrating “Together, we are magia!” Hispanic Latinx Heritage Month, which officially began at the Disney Parks on September 15. Sarah Domenech, Public Relations Manager, stated:

“As part of Hispanic Latinx Heritage Month we are happy to announce the multiple ways you can celebrate across Walt Disney World Resort through food, music, and more! Because, after all, ‘Together We Are Magia!’”

There is a tonne of wats that the Parks and Resorts are celebrating this month, and one of those includes a massive burger that very well will likely not fit in your mouth! At D-Luxe Burger at Disney Springs, an all-new burger has been created for the celebration, and it looks delicious with three different types of meat, but after eating it, I personally may need to be wheeled back to my car!

Culinary Cast Member Jose Rodriguez has pulled together his favorite Puerto Rican flavors and combinations into his own Tripleta Burger topped with ham, pork belly, and fried potato sticks in celebration of #HispanicLatinxHeritageMonth! HamburgerAvailable at D-Luxe Burger through 10/15.

Culinary Cast Member Jose Rodriguez has pulled together his favorite Puerto Rican flavors and combinations into his own Tripleta Burger topped with ham, pork belly, and fried potato sticks in celebration of #HispanicLatinxHeritageMonth! 🍔Available at D-Luxe Burger through 10/15. pic.twitter.com/Tgiigc0ZEk

As the Tweet notes, this burger will only be around until October 15, so if you want to attempt this delicious-looking meal, you better act fast!

Other offerings that Guest’s can enjoy at Disney Springs are:

There are also a tonne more offerings at the Disney Parks and Resorts, which you can learn about by clicking here. Trust us, from more delicious foods to Coco and more; these offerings are ones you need to take advantage of during your stay!

Do you plan on tasting that insane burger?