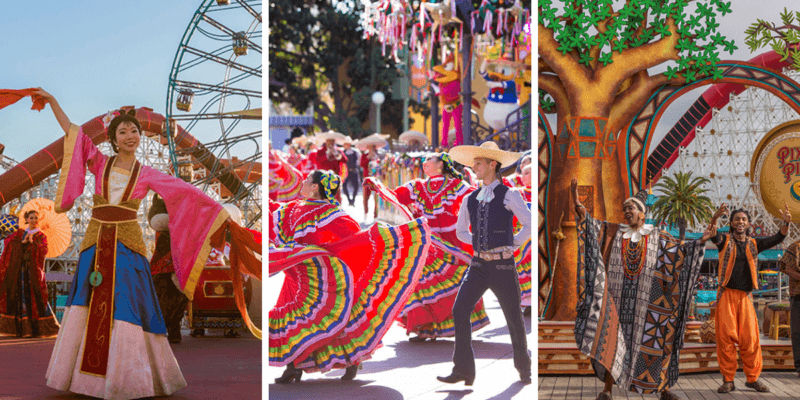 In honor of Hispanic Heritage Month — from September 15 through October 15 — Disney is celebrating the stories, cultures, and contributions of Latinx individuals both within the Walt Disney Company and outside of it. One of the ways that diversity has been celebrated at Disney is within the theme parks, and one particular Disney Cast Member — Susana Tubert — has made an impact on how cultures are represented at the Happiest Place on Earth.

“Today, our dedicated cast members are committed to ensuring that Walt’s legacy lives on by celebrating inclusivity among our cast and through the experiences we provide to our guests,” wrote Michael Ramirez in Disney Parks Blog post.

One Disney Cast Member has shared a glimpse into her own career journey and how she has helped develop new cultural celebrations for Guests and Cast Members alike to enjoy at the Disney Parks. Susana Tubert — a Creative Director for Disney Parks Live Entertainment at Disneyland Resort — has worked with her team to develop numerous events that honor inclusion and celebrate different cultures in a way that is culturally relevant and magically Disney.

Michael Ramirez at Disney asked Susana Tubert if she could share how she and her teams combine Disney stories with cultural relevancy to reach the diverse Guests audiences that visit the Disney Parks year after year.

“Over the past few years, Disney has produced an array of wonderful new movies and TV shows that reflect diverse cultural narratives — from Black Panther and Mulan to Moana and Coco, to name a few. What a perfect time to celebrate the universal values of these Disney stories and characters that have been traditionally underrepresented!” Tubert shared.

The creative director sheds light on how Disney’s Live Entertainment team developed a Latin American holiday celebration for Disney California Adventure park back in 2013. The celebration — which you may be familiar with today as Disney ¡Viva Navidad! — was meant to compliment the Christmas offerings at the Disneyland Resort in a way that was “culturally authentic and uniquely Disney.”

But Disney expanded on ¡Viva Navidad! to include other holiday festivities to celebrate a variety of cultures, as well as entertain and educate Guests. Now, Guests can experience Christmas and Navidad as well as Hanukkah, Diwali, Kwanzaa, and Three Kings Day, all in the Disney Festival of Holidays every year at Disney California Adventure.

Of course, we couldn’t forget the Coco-inspired decorations at Plaza de la Familia. Every fall, Disneyland Resort celebrates Día de Los Muertos (Day of the Dead) at Disney California Adventure. This is a Guest-favorite event, featuring wonderful live performances by not only Miguel but the Mariachi Divas and other musicians and dancers, as well. By now, this has become a cherished annual celebration at DCA that brings families together, similar to how Coco did when it first hit theaters years ago.

Tubert also described how Disney brought the spirit of African heritage to the park with the Tale of the Lion King, a new adaptation of the Lion King story that coincided with the premiere of the live-action film. Tubert noted that the show was brought to life through an intensive process of research and collaboration with cultural consultants.

“I am extremely proud of all the magical ways in which our Live Entertainment team brings to life these unique cultural celebrations year after year,” Tubert said. “They speak to park guests who love telling us how moved they are to have their children see themselves reflected in our Disney stories!”

Susana Tubert has worked on several other projects at Disneyland Resort, from Together Forever, A Pixar Nighttime Spectacular and Pixar Fest to the Disneyland 60th anniversary celebrations and so much more. You can read her full interview on Disney Parks Blog online here.

What is your favorite cultural celebration held at the Disney Parks? Is there an event you look forward to every year in which Disney California Adventure celebrates your own culture? Let us know in the comments.

Click here to book your next trip to the Disneyland Resort!

Comments Off on Disney Live Entertainment Celebrates Diversity Through Storytelling