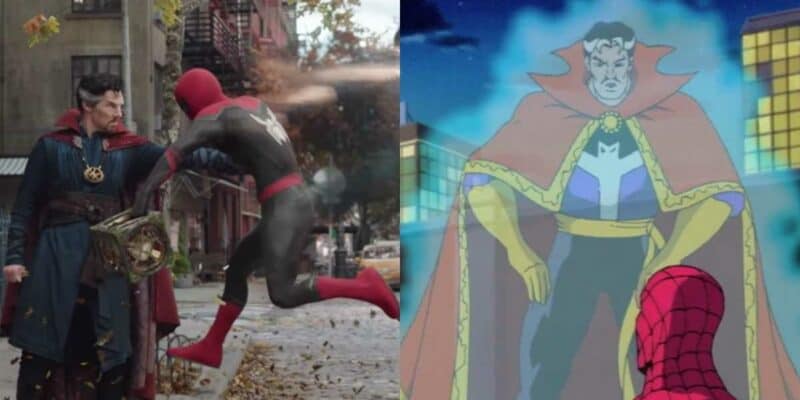 Following months and months of anticipation, fan outcry, and endless theories, the Spider-Man: No Way Home (2021) official trailer has finally been released. Debuting earlier this week, the trailer saw the return of Tom Holland’s Peter Parker AKA the eponymous Spider-Man in the third installment of Marvel Studios and Sony’s team-up franchise.

The popular trailer which broke records has now been remade using old footage of the 90s Spider-Man animated series, and it is incredible.

The Marvel movie brings back Holland as the Avenger as well Zendaya (MJ), Jacob Batalon (Ned Leeds), and Marisa Tomei (May Parker), among others. Kevin Feige’s Marvel Cinematic Universe will also welcome actors from Sony’s Spider-Man Universe as confirmed by early reports and the new trailer. Alfred Molina is back in the film as Otto Octavius AKA Doctor Octopus, as is Jamie Foxx’s Max Dillon AKA Electro. After much speculation, Spider-Man: No Way Home will also seemingly introduce Willem Dafoe’s Norman Osborn — the Green Goblin villain from Spider-Man (2002) — to the MCU. In fact, No Way Home could see the arrival of an interpretation of Marvel Comics’ Sinister Six.

Fans last saw Holland’s Peter Parker in the film Far From Home which followed the events of the climactic Infinity Saga with the Russo Brothers’ Avengers: Infinity War (2018) and Avengers: Endgame (2019). After Thanos’ (Josh Brolin) Snap, Spider-Man returned, with the rest of the MCU’s mammoth cast, to join Tony Stark/Iron Man (Robert Downey Jr.) and Steve Rogers/Captain America (Chris Evans) in the final battle against the Mad Titan.

But, No Way Home is rumored to not only feature Holland’s Peter Parker but Tobey Maguire’s (Spider-Man) and Andrew Garfield’s (The Amazing Spider-Man). The trailer reveals that Benedict Cumberbatch’s Doctor Strange is connected to the Multiversal events fans can expect to see in the new Marvel movie but as of yet, the previous incarnations of the Spidey character are yet to be confirmed.

While we await more news from the Spider-Man: No Way Home camp, fans of the 1994 animated series, Spider-Man, should take a look at this fan-made trailer. The video, uploaded by 100Bombs Studios, has racked up almost half a million views since it was uploaded on August 26. It reuses clips of Peter Parker (Christopher Daniel Barnes), Aunt May (Linda Gary/Julie Bennett), and Mary-Jane Watson (Saratoga Ballantine), as well Doctor Strange (John Vernon) and other classic villains, dubbed over with the audio of the new MCU trailer, and it’s surprisingly well-crafted.

You can check it out here:

Spider-Man’s latest entry into the Marvel Universe is sure to be a gift that keeps on giving, especially if the rumored casting of the other Peter Parker actors, as well as a potential appearance of Charlie Cox’s Matt Murdock AKA Daredevil, is anything to go by.

Spider-Man: No Way Home will continue Marvel’s Phase 4, which by the end of the year will have already seen WandaVision, The Falcon and the Winter Soldier, Loki, Black Widow (2021), What If…?, Shang-Chi and the Legend of the Ten Rings (2021), and Eternals (2021) released. And if the schedule continues as planned, fans can expect Hawkeye and Ms. Marvel to also debut this year.

What do you think of this animated trailer remake? Let us know in the comments!

Comments Off on ‘Spider-Man: No Way Home’ Trailer Remade as 90s Animated Cartoon