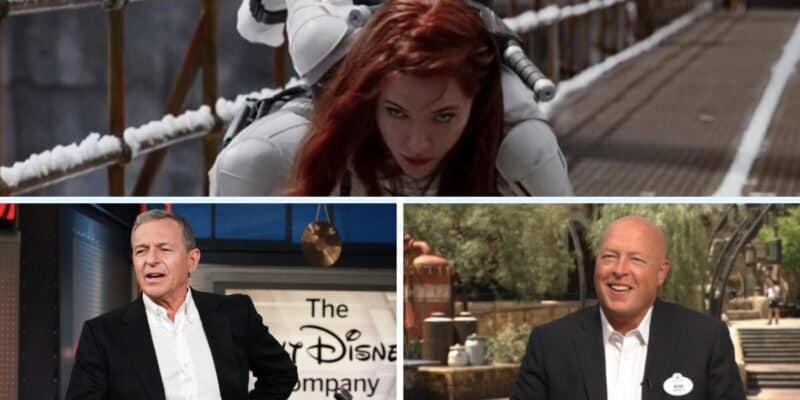 Back in late July, it was revealed that Black Widow star Scarlett Johansson was suing Disney for an alleged breach of contract when the studio giant decided to release Black Widow simultaneously on Disney+ Premier Access and in theaters.

Disney fired back and called Johansson “callous” and released her salary. Things have gone downhill from there, and Disney has now cut all ties with the star.

Now, even more details are being released about just what is contained in Scarlett Johansson’s $50 million lawsuit. Johansson not only named Disney in her lawsuit, but seemingly specifically cited sitting Walt Disney Company CEO Bob Chapek, as well as Disney’s former CEO Bob Iger — who left the position of CEO and became Executive Chairman on February 25, 2020.

In a new report from Variety, Johansson has accused the former and current CEOs of putting personal profits above their contractual obligations. Per Variety:

The actor’s team has accused Chapek and the company’s investors of enriching themselves by sending “Black Widow” to Disney Plus, boosting their stock price while cheating Johansson out of $50 million in bonuses. The complaint goes so far as to name-check Chapek and his predecessor, Iger, noting their annual compensation packages as motivation for channeling resources to Disney Plus despite the studio’s contractual commitments to talent.

While both Bob Iger and Bob Chapek took pay cuts in 2020 because of the pandemic, they still received high salaries — with Chapek making $14.2 million and Iger making around $21 million. They both have a lot of stock options, so the higher the stock prices go, the more they stand to make. This is where Johansson’s camp claims part of the problem lies.

Disney+ is solely Disney’s, so nearly all the money that customers pay for Premier Access — currently, $29.99 per movie — as well as their Disney+ subscription fees, goes right back into the company in some capacity or another.

Johansson believes that Chapek and Iger’s desire to drive up Disney’s stock price — and, in turn, their own earnings — through Disney+ and Premier Access is causing them to violate the contractual obligations they made with actors prior to the creation of Disney+.

If Johansson is successful in her lawsuit — and possibly even if she isn’t — the impact will be felt all across Hollywood. Prior to the pandemic, many contracts for major studios did not think about adding streaming into the wording, unless the studio was a streaming platform like Amazon. However, with the pandemic changing the way people watch their movies, Scarlett’s lawsuit will have implications across the board as actors and studios work together to navigate new viewing habits.

Do you think Bob Chapek and Bob Iger are putting personal gains over contractual obligations? Let us know in the comments!