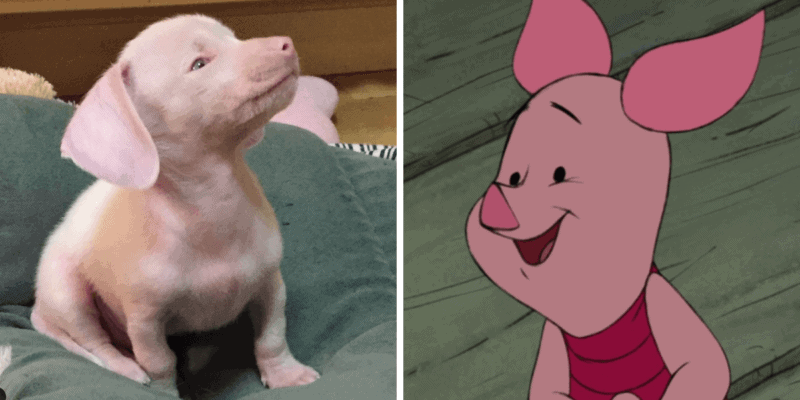 Back in 2019, the world was introduced to an absolutely adorable Chihuahua named Piglet. However, Piglet was no ordinary Chihuahua. Piglet was rescued from a hoarding situation in Georgia where he was born with a pink hue, weighing only one pound. Piglet was also deaf and blind.

Even though Piglet was born into a rough life, he was rescued and eventually adopted and is now living his best life. Piglet has a massive Instagram following of over 250 thousand, and he inspires people every day to never let anything get in their way.

What people love about Piglet is just how much he is like his namesake — the lovable pink pig from Winnie the Pooh. Piglet is the best friend of the titular bear character and is known for being a timid and anxious little pig. However, even though he struggles with fear, he never lets it stand in his way. Piglet will always conquer his fears if it means being there for his friends.

In light of all the anxiety and fear that he has overcome, Piglet’s owners have written a book to celebrate the little puppy. Piglet: The Unexpected Story of a Deaf, Blind, Pink Puppy and His Family recounts Piglet’s rough entry into the world and his now-bright future. A little more information about the book is shared on Amazon.

When Connecticut veterinarian Melissa Shapiro gets a call about a tiny deaf blind puppy rescued from a hoarding situation in need of fostering, she doesn’t hesitate to say, “yes.” Little does she know how that decision will transform her, her family, and legions of admirers destined to embrace the saga of the indomitable pink pup.

One of the most anxious dogs Melissa had ever encountered, the traumatized Piglet weighed under two pounds upon his welcome into the Shapiro household—which included Melissa’s husband Warren and their three college-aged kids, plus six other rescued dogs. After weeks of reassurance, and lots of love, Piglet connected, gained confidence, and his extraordinary spirit emerged. Melissa soon forged a powerful bond with Piglet, allowing the two to communicate without sound or visual cues.

Piglet’s confidence shines through in everything that he does. The small buy feisty dog lives each day to its fullest and inspires people around the world.Speaking with People, Piglet’s owner Melissa Shapiro gushed about the incredible puppy who came into her life two years ago.

“He is a confident, happy little dog,” Shapiro says. “He has a magnetic type of charm that reflects his intense focus on connecting with his family, friends and the world around him. He soaks up attention like a true celeb. But overall, he is a down-to-earth little guy who lives each day with exemplary positivity and joy.”

Piglet: The Unexpected Story of a Deaf, Blind, Pink Puppy and His Family is currently available for purchase on Amazon.

Are you inspired by the amazing story of Piglet? Let us know in the comments!