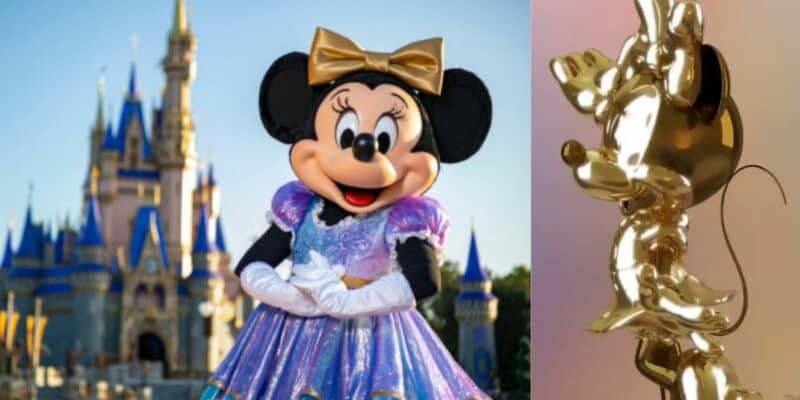 Called the Fab 50, these golden statues represent the characters who have been integral in telling magical Disney stories. They will be found in all four theme parks (Magic Kingdom, EPCOT, Disney’s Hollywood Studios, and Disney’s Animal Kingdom) at Disney World. The best part? They are interactive!

Here’s a look at the concept art for some of the iconic Disney characters featured as Fab 50 statues in Magic Kingdom:

Artist @jmaruyama has confirmed that Minnie Mouse is part of the “Disney Fab 50 Character Collection” that you’ll soon find across the four @WaltDisneyWorld theme parks during “The World’s Most Magical Celebration” starting October 1! #DisneyWorld50

Artist @jmaruyama has confirmed that Minnie Mouse is part of the “Disney Fab 50 Character Collection” that you’ll soon find across the four @WaltDisneyWorld theme parks during “The World’s Most Magical Celebration” starting October 1! #DisneyWorld50 pic.twitter.com/85V2v4byJK

We can see that Minnie Mouse — being the Disney Parks icon she is! — was included in the Fab 50 concept art released by Disney earlier this year. Mickey Mouse was actually the very first Fab 50 statue revealed, so it comes as no surprise that Minnie Mouse will be joining him. However, we are certainly excited to finally get a glimpse of Minnie herself. We can’t wait to see Minnie Mouse’s golden statue in person when the 50th anniversary celebrations begin at Walt Disney World!

Also, note that the Fab 50 character statues are unique to Disney World. Just as when Disneyland celebrated its 60th anniversary Diamond Celebration six years ago, Disney World is hosting “The World’s Most Magical Celebration,” with unique offerings only available at the Florida Disney Parks for a limited time.

The Walt Disney World Resort is The Most Magical Place on Earth, so, appropriately, the 50th anniversary is being dubbed The World’s Most Magical Celebration. The Disney Fab 50 statues are only one element of the 50th anniversary, and there is so much more that Disney has in store for Guests of all ages who are traveling to Florida to experience the magic. Remember that the 50th anniversary lasts for a full 18 months, so you can visit sometime during the rest of 2021, all of 2022, or even in early 2023 and still have the opportunity to elaborate this magical milestone.

Are you planning to visit Disney World for the 50th? Click here to book a trip!

Comments Off on Golden Minnie Mouse Statue Coming Soon to THIS Disney Park!