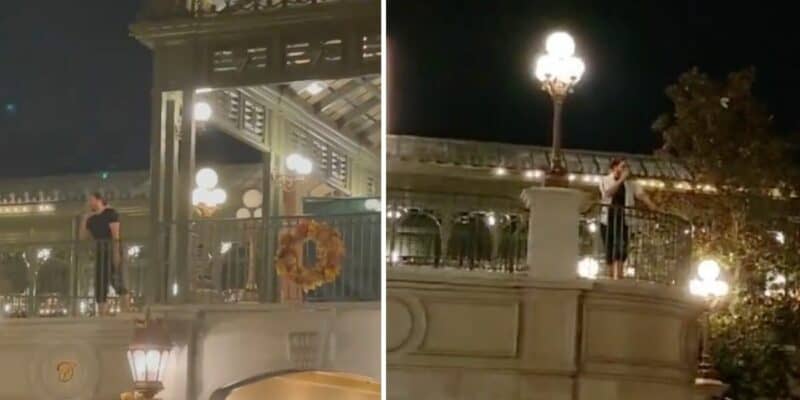 When it comes to theming, Disney World is typically the place to beat. But even Disney may sometimes slip through the cracks when it comes to perfecting all of the themed details in the parks.

Typically, when we think of Main Street, U.S.A, we think of parades, cavalcades, the Dapper Dans, and the Citizens of Main Street (who have yet to return). Lately, it seems something interesting has been happening at the Walt Disney World Railroad. When Happily Ever After returned, we were able to see fireworks once again, but the kiss goodnight seemed to be still missing from Magic Kingdom.

Now, it seems that Disney is finding a new way to close out the Park, and I can’t lie, it does seem a little out of place for a turn-of-the-century train station.

Mickey Views (@MickeyViews) posted a video of a DJ dressed in regular clothes saying goodbye to Guests as they leave the Park. The video seems to be from this past Saturday night and showcases the DJ walking around the top of the train station, telling Guests to throw their hands up in the air and party as they leave the Most Magical Place on Earth.

9PM last night during regular guest hours at the Magic Kingdom. Not a joke

9PM last night during regular guest hours at the Magic Kingdom. Not a joke pic.twitter.com/sg5kprzqgf

The Tweet has already begun to make its rounds and has not been well received by many who feel that this makes Magic Kingdom feel more like a Six Flags rather than a Disney Park. It seems that this has been going on for a few days now, as VikkiMouse (@VikkiMouse321) posted a video of the DJ from this past Thursday.

Magic Kingdom has a singalong dance party on Main Street! I have so many questions

Magic Kingdom has a singalong dance party on Main Street! I have so many questions pic.twitter.com/MJ86wutliC

Reporter Scott Gustin (@ScottGustin) was even shocked to see the DJ performing.

It’s a Saturday night. After your cousin’s cheesy wedding and long wedding reception, you go to Magic Kingdom for a quick ride on Space Mountain.

And then you find out the DJ from your cousin’s wedding followed you and is now telling you to raise the roof.

And look… Disney has DJs at the after hours parties and that is fair game! But this is just… weird.

Maybe the goal is to get people to leave as quickly as possible and not want to stay after park close. And if so… mission accomplished?

Some may argue that we have seen DJs at Magic Kingdom before, especially during After Hour events; however, this is not taking place during Boo Bash, but rather Park hours. It also should be noted that these two evenings where the video footage was taken were not Boo Bash event nights.

After such a magical day, it seems like an odd choice to walk out of Magic Kingdom to Miley Cyrus blasting while a DJ hypes up the crowd. Considering this addition to the end of the night at Magic Kingdom seems to be very new, we will keep you updated on if it is something you can expect long term.

What do you think about Magic Kingdom having a DJ close out the night? Let us know in the comments below.