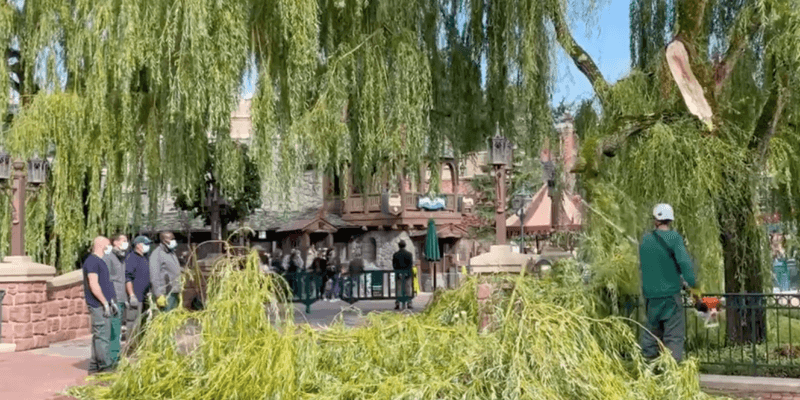 Workers are in the process of removing a large branch that came crashing down on the Fantasyland pathway at Disneyland Paris.

DLP Report took to Twitter to share a video of the branch blocking the Fantasyland pathway, along with the caption:

A large branch fell on a Fantasyland path this morning and is currently being removed. Everyone is safe.

? A large branch fell on a Fantasyland path this morning and is currently being removed. Everyone is safe. pic.twitter.com/ceqPkBa0Oc

At this time we are unsure as to what the cause of the branch breaking is, but luckily, everyone is safe, according to DLP Report. Workers are seen removing the large branch from the pathway and it should be cleared in no time.

Others replied to DLP Report, jokingly saying this branch saw the prices for the new paid FastPass system, Premier Access, which soft-opened today at Disneyland Paris, and just gave up:

Did it open the premier access app, see the prices and then collapse???

Did it open the premier access app, see the prices and then collapse???

The Premier Access system will charge Guests around €8-€15 per Guest, which is $9-$18, per ride at the theme park. The pricing varies depending on popularity of attraction. For example, more popular and E-ticket attractions will cost more than those rides that do not typically have a long line or such high demand.

It is also important to keep in mind that the prices for each attraction may also change depending on what the time of year is. For example, if you visit Disneyland Paris during the peak seasons, Premier Access may cost more.

Are you visiting Disneyland Paris today? Did you witness the branch fall into the Fantasyland pathway? Let us know in the comments below.

Comments Off on VIDEO: Large Branch Comes Crashing Down on Fantasyland Pathway