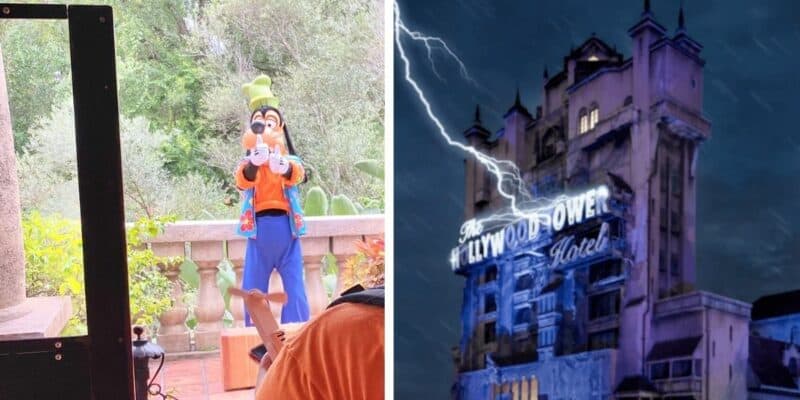 Lately, we have seen a lot of Disney characters pop out in interesting areas around Disney World, as meet and greets are currently on pause.

After reopening, Walt Disney World moved away from meet and greets due to the ongoing pandemic and moved towards character interactions from a distance. You can still snap a selfie with Mickey Mouse or your chat with your favorite Disney princess, but the times in which you may see them are no longer scheduled or constant. All interactions happen at a distance as well, and there is no organized line, which means that each character may be interacting with multiple Guests all at once.

At Disney’s Hollywood Studios, we can see characters during cavalcades, as well as around the Park. I have seen Donald watering his plants in one of the gated-off flower beds before, and now, it looks like Goofy is hanging around Tower of Terror, but he does not fit in too well.

Many Disney characters have different outfits, depending on what area of the Park they are in. Their “normal” clothes are typically seen in Magic Kingdom, Disney’s Hollywood Studios, Disney’s Animal Kingdom, and EPCOT, but other more immersive outfits may be worn at times too. For example, Mickey Mouse is often in his safari gear at Animal Kingdom.

Lauren (@laurenreeding) noticed that Goofy was hanging out around the attraction, but his clothing seemed a little off for the area. Goofy seems to be wearing a floral button-up Hawaiian shirt on top of his regular outfit.

Outpost Orlando (@outpostorlando) saw Goofy and Max ready to head out on a family vacation yesterday!

Disney has received a little bit of heat lately when it comes to theming after a DJ popped up at Magic Kingdom in normal clothes and pumped up the party as Guests walked out of the Park at the end of the night. Having a DJ on top of the Main Street Station felt jarring to many, as it did not fit in with the other immersive details in the area.

At least this time, Guests waiting in line for the attraction will gain an extra perk!

What do you think of Goofy’s outfit right by the Tower of Terror queue?