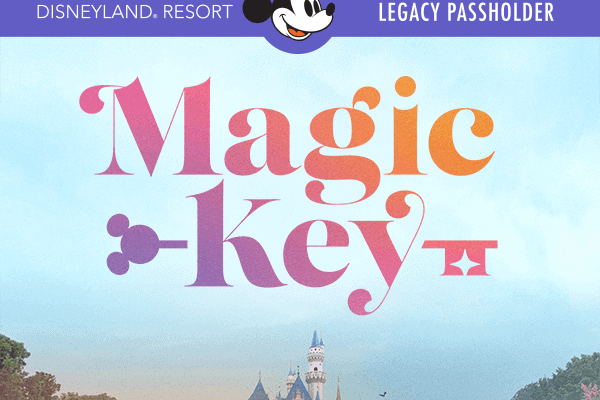 Disney has officially dropped some exciting news regarding the all-new replacement for the Disneyland Resort Annual Pass program.

As one of our biggest fans, we wanted to make sure you were the first to know about this NEW offering. We are thrilled about this coming announcement and we encourage you to stay tuned because all the details will be revealed tomorrow no earlier than 1 p.m. PST!

Notice that in this email, Disney specifically does not call this an “Annual Pass program.” Instead, this is a “new offering” called the “Magic key program.” At this time, it is unclear if this will be the same as an Annual Pass or entirely new, with new benefits and new magic to offer the “biggest fans.” But as Disney notes, more information is coming very soon!

This email sent on Monday is simply a tease of what is to come. All of the details for the Magic Key program will be revealed tomorrow, Tuesday, August 3, no earlier than 1 p.m. PST. So get excited, Disneyland fans! So many of us have been waiting months and months for this news — and Disney acknowledges that, since the email subject line says, “Legacy Passholders, the wait is nearly over!”

Disney first announced that they would be “sunsetting” the Disneyland Resort Annual Passport program in early 2021. At that time, the theme parks of the Disneyland Resort were still closed amid the COVID-19 pandemic, and it was unclear when Disneyland Park and Disney California Adventure Park would be able to reopen. By late April, the Parks reopened their gates, but there still wasn’t an AP program — though Legacy Passholders were still able to use their former AP discounts on food and merchandise.

Disney officials have continued to tease the future of the Disneyland Resort AP program for the past several months, with Disney Parks, Experiences and Products Chairman Josh D’Amaro and Disneyland Resort President Ken Potrock continuing to say that a “new offering” for the “biggest fans” would be “coming soon.” Now, we know that to be true!

Stay tuned to Inside the Magic for more information — we’ll continue to update our website as Disney shares more details about the new Disneyland Resort Magic Key program.

Are your excited for this new offering that will replace the Disneyland Annual Passholder program? Do you plan to join the Magic Key program as soon as possible? Let us know in the comments!