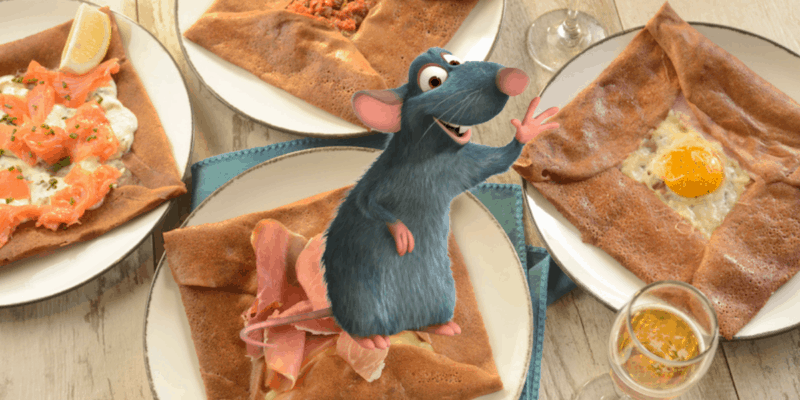 Disney has just revealed the menu for the brand-new La Crêperie de Paris restaurant in EPCOT. This new food offering is part of the expansion of the France Pavilion in the World Showcase that also includes the Remy’s Ratatouille Adventure attraction.

Disney has been hard at work on building an elegant and exciting expansion to the France Pavilion at EPCOT’s World Showcase. With a new attraction and new food offering set to open for the 50th anniversary of Walt Disney World, you won’t want to miss this!

Now, we have a first look at what the menu for La Crêperie de Paris will look like. Here is how the Disney Parks Blog describes the new restaurant:

When the newly expanded France pavilion at EPCOT debuts on October 1, helping kick off “The World’s Most Magical Celebration” in honor of the 50th Anniversary of Walt Disney World Resort, you’ll be immersed in some of France’s signature sights, sounds, smells, and – of course! – tastes. One of the most delicious offerings, La Crêperie de Paris, is a traditional crêperie with a menu inspired by the Brittany region of France. The table- and quick-service restaurant, where everything is made from scratch and to order, will serve savory galettes and sweet dessert crêpes, along with some of Brittany’s famous hard ciders. Read on to learn all about the menu!

The Disney Parks Blog goes onto say that the crêpes will be very thin and in a classic Brittany style. Both sweet and savory options will be available, and the galettes are gluten-free! So there will be something for everyone in your party to try at La Crêperie de Paris. Of course, there will also be a Remy-inspired treat to enjoy here as well. Hard ciders will be available at this dining location that will perfectly pair with the food.

You will have the option of enjoying a prix fixe menu which will include soup or salad, one savory galette, a crêpe, and a beverage. Here is a closer look a the menu:

All of this food sounds amazing and we cannot wait to try La Crêperie de Paris when it officially opens on October 1.

October 1 will also be the grand opening date for Remy’s Ratatouille Adventure, which will be utilizing a virtual queue system. That should help keep the new courtyard area more open so that you can go enjoy a crêpe!

In addition to the expansion of the France Pavilion opening on October 1, EPCOT will also be debuting a brand new nighttime spectacular, Harmonious.

Be sure you grab a Park Pass reservation for EPCOT in order to enjoy these new offerings.

Are you excited to try out the new La Crêperie de Paris? Let us know in the comments!