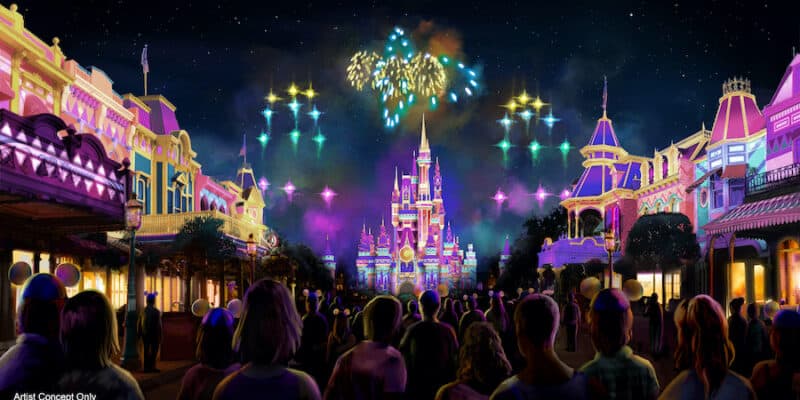 It looks like Disney is getting closer to finalizing its new fireworks show that will premiere at the Magic Kingdom for Walt Disney World Resort’s 50th anniversary, The World’s Most Magical Celebration!

Disney sent out an announcement to residents who lived close to Disney World that there would be fireworks testing happening two nights this week. Since Disney has already started showing its Happily Ever After fireworks again, presumably the only show that would require testing at the Magic Kingdom is the new show, Disney Enchantment.

The Walt Disney World Cast and Community posted on its Facebook page about the fireworks testing that will take place on August 30 and September 1.

Around Magic Kingdom tonight (Aug. 30) and Wednesday night (Sept. 1), some of our neighbors may hear the sound of fireworks a little later than normal. That’s because we are trying out some new fireworks in short bursts between 10:30 pm and 1:00 am. We will do our best to keep noise at a minimum and apologize to our neighbors and Guests for this inconvenience.

Disney Enchantment is a new firework show that will begin on October 1, when Disney kicks off its epic 18-month long 50th anniversary celebration. In addition to the new Magic Kingdom fireworks show, there will also be a new attraction, Remy’s Ratatouille Adventure, and a new nighttime spectacular, Harmonious, at EPCOT; a new show, Disney KiteTails, at Animal Kingdom; and decorations found throughout all four theme parks, including Disney’s Hollywood studios.

Disney Enchantment will celebrate the magic of dreams and all things Disney, and will bring together memorable Disney characters and Disney songs.

More information on the fireworks spectacular was shared by Disney Parks Blog:

In “Disney Enchantment,” we join dreamers like Tiana, Miguel, Rapunzel, and brothers Ian & Barley from “Onward,” and we set out on an incredible journey with adventurers such as Moana, Raya, and Judy Hopps. Joe Gardner from Disney and Pixar’s “Soul” takes us into “the zone,” where we discover a whimsical world inspired by the style of legendary Disney artist Mary Blair and filled with beloved characters from classic stories like “Beauty and the Beast” and “Alice in Wonderland” to contemporary tales including “Luca” and “Wreck-It Ralph.” Everything builds to a climactic moment, as Tinker Bell takes flight, spreading shimmering gold pixie dust and empowering us all to believe in ourselves and the magic all around us.

Disney is currently filming a television special for the 50 Anniversary, so it is possible that the fireworks will not only be tested but also filmed, so they can be included in the show. ABC will air the television, called “The Most Magical Story on Earth: 50 Years of Walt Disney World”, on October 1, to fall in line with the Anniversary kickoff.

Disney Enchantment will run throughout the entire 50 Anniversary celebration. It will be shown nightly at the Magic Kingdom, but as always, the shows will be weather permitting.

Will you be visiting the Walt Disney World Resort during its 5oth anniversary? Will you be watching Disney Enchantment? Let us know in the comments!