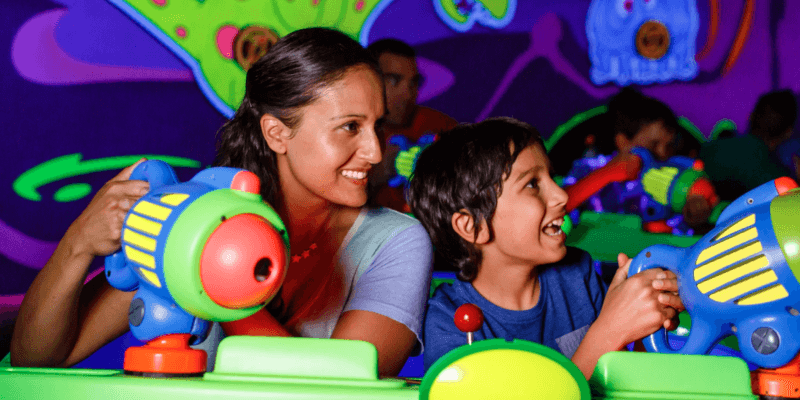 Not long ago we reported on how one Disney fan called out the popular Tomorrowland theme park attraction, Buzz Lightyear’s Space Ranger Spin, as the next ride Disney Parks should extensively refurbish. Not because of its content, but because the technology is so outdated.

Now, this topic has resurfaced on the internet and fans are continuing to ask Disney to refurbish the Tomorrowland ride.

One Reddit user started a thread on the social media platform by simply asking “Is it just me or does Buzz Lightyear Space Ranger spin need a major upgrade/revamp?”, which initiated several others to voice their opinions on the ride.

Definitely needs the blasters on a cord like CA or MiB Alien Attack. Having them bolted down makes it so much harder. It’s not as bad on Toy Story since you’re always facing the screen there. And the tunnel really needs a graphics update. I do love all the real sets though, instead of just staring at screens.

And shust89 did not hesitate to bring up the dark tunnel portion of the ride:

The tunnel really felt like the budget ran out and that was the cheapest option lol.

Another user, who goes by Silverhop compared the Disney World version to the Disneyland version, saying that Disney World should bring removable laser guns:

Needs the removable guns like Disney land. And better lights/paint

And this is something that dustyknucklesss agreed with:

Literally was going to say this, as well as the targets that light up and react more to being hit. Just looks overall way more interactive than the FL version

While ukcats12 feels that Buzz Lightyear’s Space Ranger Spin should just be removed completely and replaced with something else since Disney’s Hollywood Studios has Toy Story Mania:

Honestly just turn it into something completely different. Midway Mania is the superior shooting ride and they don’t really need two (And now Disneyland has three with Web Slingers).

At this time, Disney has not yet announced if Buzz Lightyear’s Space Ranger Spin will undergo a refurbishment, but it is clear that fans and Guests are really wanting this to be the next ride that has an overhaul.

What do you think? Should Disney take the time to update and refurb the Magic Kingdom Tomorrowland attraction Buzz Lightyear’s Space Ranger Spin? Let us know in the comments below.