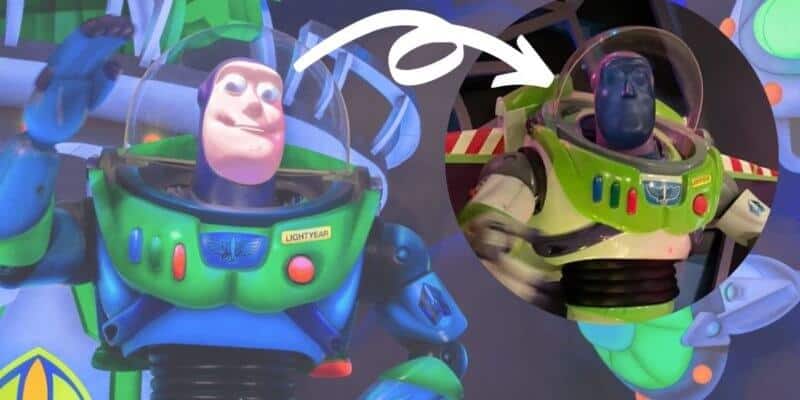 Walt Disney World is filled with one-of-a-kind attractions that make for a once-in-a-lifetime experience. The rides at the theme parks fully immerse Guests into different worlds using visual aspects, ride vehicles, and Audio-Animatronics. However, sometimes things don’t go according to plan and technical difficulties make for an… interesting experience.

Well, one of the animatronics at Magic Kingdom is apparently experiencing those difficulties today. In fact, Buzz Lightyear at Buzz Lightyear’s Space Ranger Spin has turned blue in the face!

Facebook user Gabriel P. shared the following photo (below) to the Annual Passholders – Walt Disney World Resort Facebook group, as well as Inside the Magic. The image shows the Buzz Lightyear animatronic, which is located in the queue of Buzz Lightyear’s Space Ranger Spin in Tomorrowland at Magic Kingdom. From the looks of it, Buzz is experiencing some technical difficulties.

Buzz turned a little blue just as he stopped talking to Guests, though he was still moving, Gabriel told Inside the Magic. Approximately two minutes later, the entire animatronic stopped working along with the attraction.

However, at the time of publication, the ride looks to be up and running with a 35-minute standby wait, per My Disney Experience. We are unsure if the Buzz animatronic is back up and running like normal or if it is still experiencing technical difficulties at this time.

Are you in Magic Kingdom today? Did you notice Buzz Lightyear turn blue? Let us know in the comments below.

Comments Off on Buzz Lightyear Animatronic Turns Blue in the Face!