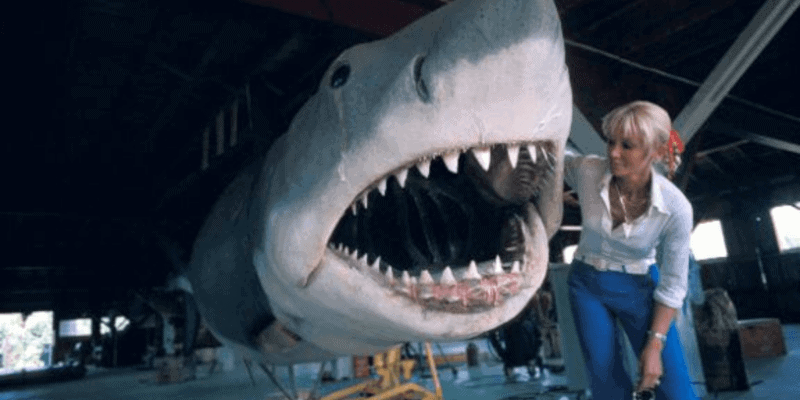 Legendary Australian diver Valerie Taylor has devoted her life to protecting the ocean and its wildlife, especially sharks with a bad name. Inadvertently creating the greatest hysteria surrounding the sea creatures with Steven Spielberg, Taylor is righting the world’s wrongs against sharks in a new documentary on Disney+.

The now-legendary divers, filmmakers, and absolutely fearless shark advocates and underwater conservationists captured unbelievable footage of a great white shark mangling an (empty) underwater cage after the beast was unexpectedly caught in the cage’s cable wires.

In an interview, Valerie Taylor stated:

“The cage broke off the winch and it all went tumbling down in a great big mess.  I saw this about to happen. I picked up the above-water camera and started filming, saying to myself, ‘Keep your horizons straight.’ Ron was down there. He filmed the shark with the cage coming down. It was all very dramatic.”

“You can’t direct a shark or a fish to do what you want. It’ll do what it wants. We had a bit of luck when the shark hit the side of the cage, broke it up and tore it off the side of the boat, winch and all.

It [the boat] went tumbling to the bottom and Ron happened to be down there filming. They wrote that into the script.

When the fuss broke out after the film was so successful, and people were so afraid, Universal [Pictures] sent Ron and I around America. We did all sorts of talk shows, telling people not to be afraid.

But it seems the average person likes to have a monster out there. And sadly, it’s a much-maligned fish, the shark.”

There were three mechanical “Bruces” made for the production of the film. Each shark cost approximately $250,000, and they notoriously sank. On the first day of production, one shark sank to the bottom of the ocean once Spielberg yelled “action!”

As a result, much of the filming transformed from filming the mechanical sharks to filming from the murderous monsters’ perspective (a Hitchcock technique).

Universal was banking on Taylor’s capture of a real-life shark demolishing a diver’s cage with the animatronic sharks constantly falling apart. The shoot went so well that the two earned numerous awards for their contributions to the film.

But, that moment, in particular, sent 1975 audiences (an estimated 67 million viewers) over the edge (of the boat)!

Valerie and Ron Taylor, who ditched their champion spearfishing careers for wildlife conservation in the 1960s, traveled America and the world to protect sharks with every media they could use: film, television, and novels.

Valerie Taylor has been bitten by sharks at least four times, but insists that she’s never felt afraid and that misconceptions from humans about sharks are false.

“Out of several hundred species, there’s only about six or seven that are potentially dangerous.”

According to National Geographic, humans have a one in 3.7 million chance of being killed by a shark. Rather, sharks are at a higher risk of dying in the ocean than people are.

Overfishing has been cited as the main reason for the decline of shark and ray populations in the ocean, with a 70% decrease in populations between 1970 and 2018.

“I’ve stopped seeing them when I go in the water,” Valerie said. “Once you would see them every time. Now you don’t.”

Valerie and Ron Taylor’s work on preserving sharks and the ocean is a never-ending catalog of short films, documentaries, and photos.

Most recently, the 85-year-old starred alongside Marvel actor Chris Hemsworth in National Geographic’s Shark Beach (2021) documentary that premiered during the 2021 Shark Week. The short film is now available on Disney+ and features the two discussing the stunning realities of sharks and their instincts when interacting with humans.

“If you stay really still when a shark grabs you and he realizes he’s made a mistake, he’ll let you go,” Valerie Taylor said. “The problem is, when something horrible happens, you always pull away. It’s an instinctive act. I’ve always stayed still, and the shark has let go.”

On top of that amazing co-star, Valerie Taylor stars in her own Nat Geo documentary on Disney+: Playing with Sharks (2021).

The fascinating documentary features the “pioneering scuba diver Valerie Taylor, who has dedicated her life to exposing the myth surrounding our fear of sharks,” according to IMDb.

Valerie Taylor isn’t giving up and educating the masses and helping enlighten misconceptions about great white sharks and many other underwater species. She’s devoted her life to bringing light to widely feared or hated wildlife, and thanks to National Geographic, new generations are hearing her important story.

You can watch Playing with Sharks and Shark Beach on Disney+.