It was perpetually July 4th in Amity, home of the classic Jaws ride. But on July 8th, 2014, Jaws’ replacement will officially open as Universal Orlando debuts, Diagon Alley.

The massive Wizarding World of Harry Potter expansion is far bigger and better of an attraction than Jaws and its Amity area ever was. But just because Jaws is gone doesn’t mean it should be forgotten.

Mike Aiello is Universal Orlando’s Director of Entertainment, in charge of creating the new area’s live entertainment. But his own journey to that “Harry Potter” position began many years ago when he was hired for the role of Jaws ride boat captain, rounding Amity daily.

“Working at Jaws was a great time in my life,” said Aiello. “I met a lot of people that I still am very close to. I’m very fortunate to have been working here so long and to see this park evolve into what it is today.”

“To be a part of and standing on the very spot of two amazing attractions at two very different points in my life and the two very distinct iterations of the studios is simply fantastic,” Aiello continued. “Jaws holds an exceptional place in my heart and those on the teams in various capacities creating this new Wizarding World. It will always be the best and the only.”

As such, Universal’s designers have included a few hidden references to the former attraction throughout the land. The list below likely isn’t comprehensive, as there are probably, even more nods to be found. But these are some pretty good ones.

It’s hard to believe the Amity area pictured in the animated gif below has transformed into the London waterfront embankment that exists today.

When wandering around Diagon Alley, fans of the Jaws ride may be curious to know exactly where they would be standing if the old lagoon was still around. In fact, Aiello has been doing just that. “I found myself many times during the construction and rehearsal phase of Diagon looking around and placing myself back at Capt. Jake’s,” he admitted. “‘Where am I standing right now? Is this turn 1 at Amity 3? Or am I on Brody’s lawn?'”

The satellite images above offer a few frames of reference to keep in mind when walking through. The former spot for the Bruce photo op is almost exactly on the far right corner of Grimmauld Place. The old Jaws loading area is now the area near the Carkitt Market stage. Brody’s house was roughly where the entrance to the Escape from Gringotts ride is today. Much of the old lagoon, including the boathouse, are encompassed by the massive Gringotts show building. The fiery finale of Jaws was roughly around where the Hogwarts Express is boarded now and parts of Horizont Alley and a bit of Knockturn Alley. And the Jaws unload area was where The Leaky Cauldron now sits. 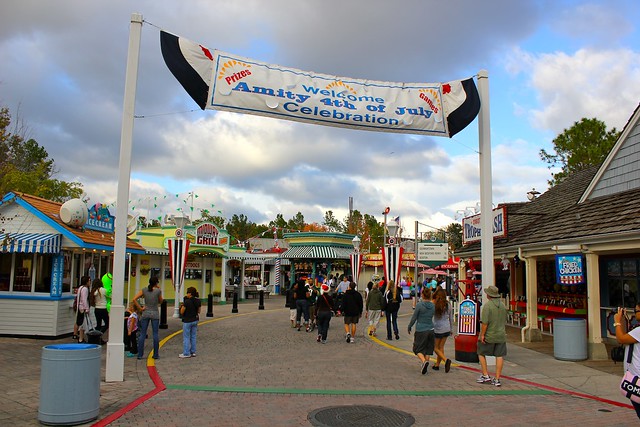 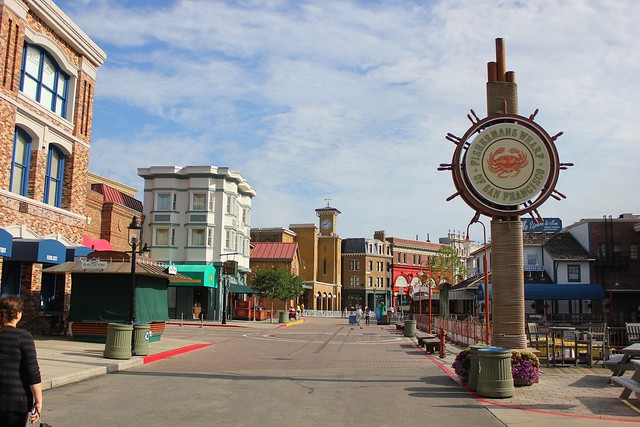 Entrance into Diagon Alley requires passing through the London facades, which are a major change from the boat shack that once marked the entrance of Jaws. 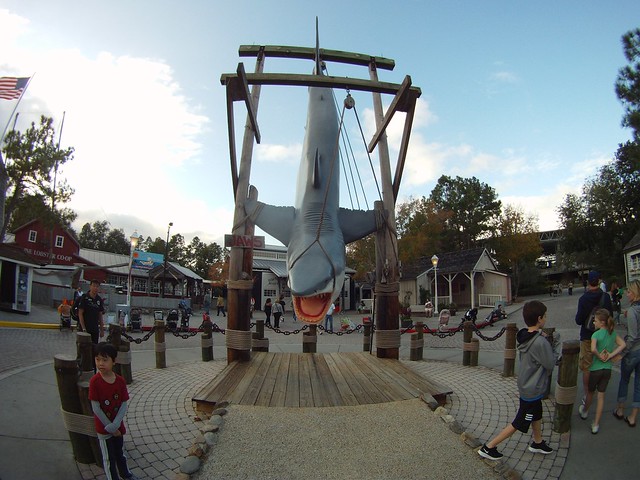 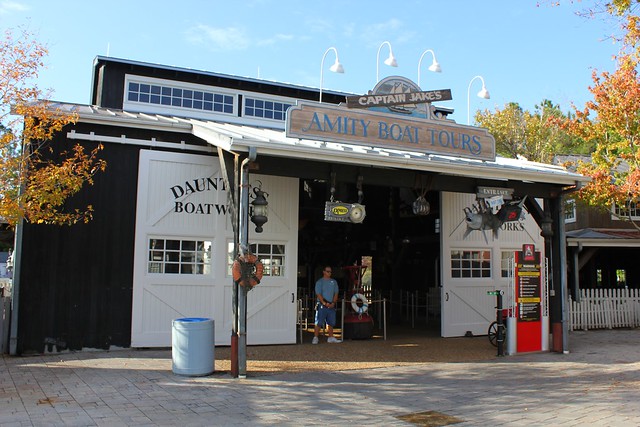 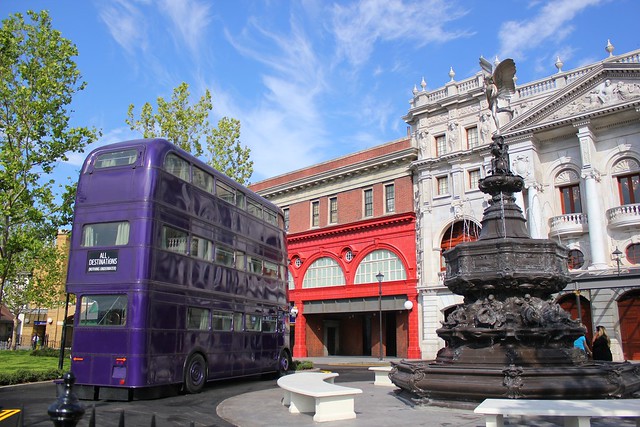 They don’t share the same space, but the comparison is worth noting. Thankfully, the Bruce shark photo op is still in the park, relocated into nearby San Francisco.

The Record Store facade on the left side of the London embankment features the first of a few Jaws tributes. The displayed records are fictional and are full of in-jokes and credits from the creators of Diagon Alley. But one is a Jaws reference. 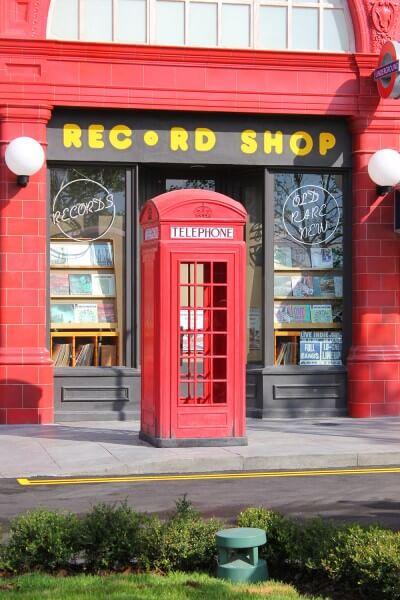 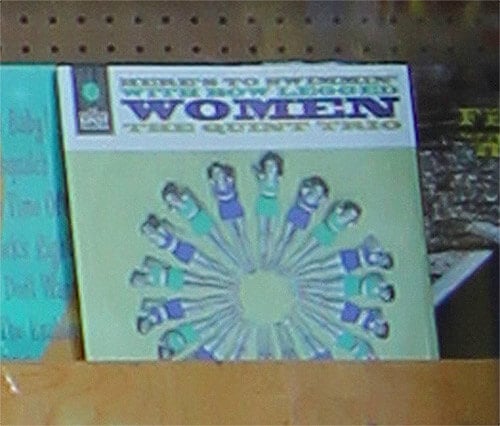 The record’s title is “Here’s to Swimmin’ with Bow Legged Women” by The Quint Trio. It’s a quote from the character Quint in the movie “Jaws,” one of a trio that sails out to hunt the shark and Brody and Hooper.

Deeper inside Diagon Alley, next to Florean Fortescue’s Ice-Cream Parlour, is a store facade called Mr. Mulpepper’s Apothecary. Inside one of its windows behind some plants is a shark’s jawbone, another Jaws tribute. 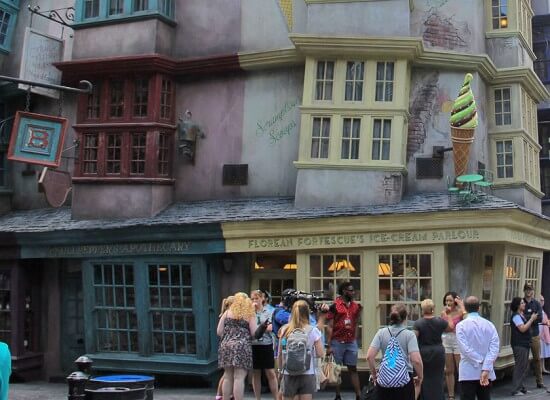 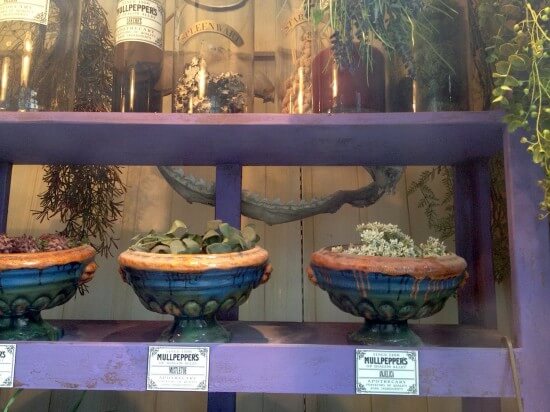 Nearby, Wiseacre’s Wizarding Equipment is decorated with various astronomical instrumentation. High up on shelves are quite a few telescopes, the largest of which were partially constructed using pieces from the old Jaws boats. 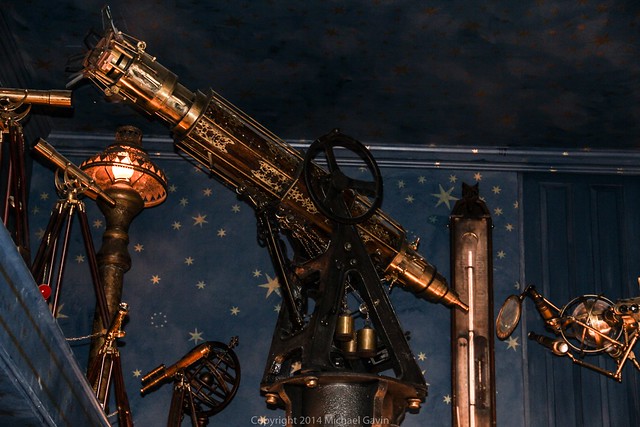 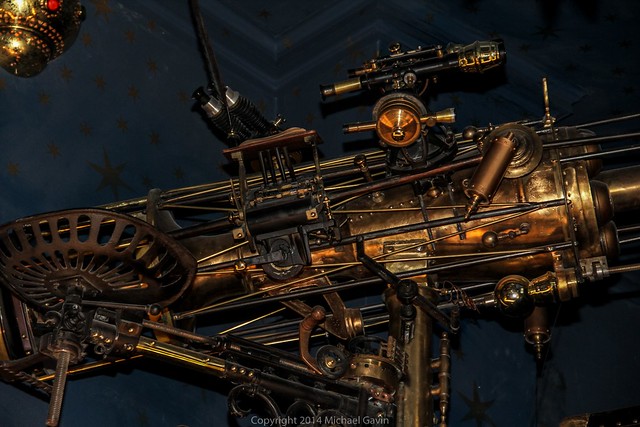 Behind the Thrills was alerted to another Jaws reference in the form of a song sung by the shrunken heads in Knockturn Alley, also featured in the movie:

(These are the Jaws ride references spotted so far, but not necessarily the only ones. Comment below if you’ve heard of or seen any more.)

As the July 8th, the opening date of Diagon Alley, approaches, take a look back at the classic Jaws experience that had been at Universal Studios Florida practically since the park first opened, courtesy of the video tribute below. With 6 million views, it’s clear fans miss this old attraction.

And what would happen if the two worlds were blended? 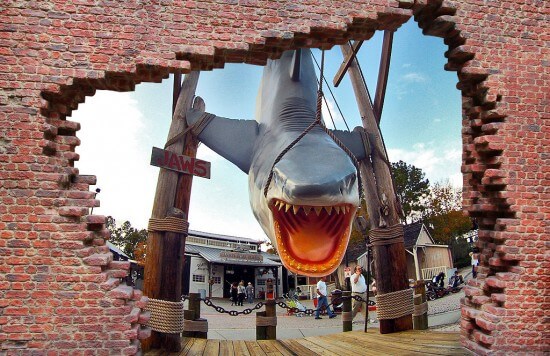 Perhaps the Hogwarts Express would be a boat, replacing Platform 9 3/4 with a dock? The Internet made it happen, with rather amusing results: 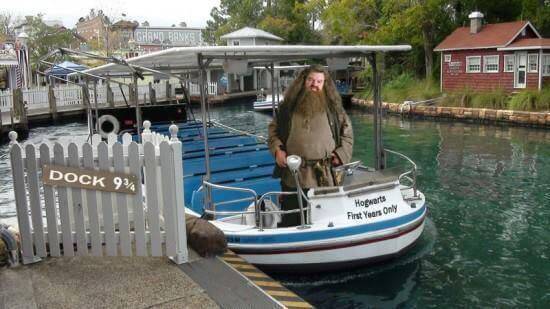