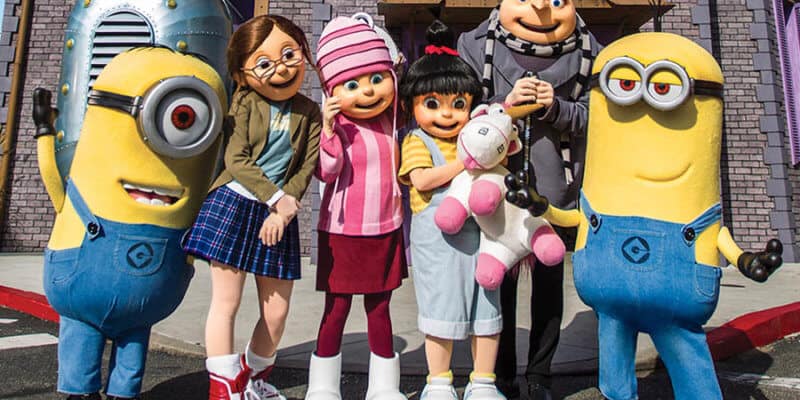 With theme parks being very high profile places that attract people of all ages, every move they or their employees make reflects the theme park as a whole.

This is why both Disney and Universal ensure that their Cast Members and Team Members are very well-trained to represent their respective theme parks in the best light possible. At times, however, someone’s actions could sway from the norm and give the company a much larger issue.

Universal Orlando Resort has faced lawsuits in the past, and it seems that now another has come to light. It has been reported by ClickOrlando that two separate families are suing the theme park after the Despicable Me character, Gru, conducted separate meet and greets in which the character displayed a racist hate sign with his hands while posing with biracial children. Per their report:

The civil rights lawsuit was filed on behalf of two girls, who were 5 and 6 years old at the time of the photos, in the Ninth Judicial Circuit Court in Orange County on June 23. The complaint lists Universal Orlando as the defendant. The “OK” hand gesture has been defined as a sign used to indicate “hate” by the American Anti-Defamation League. The lawsuit listed several high-profile hate crimes during which the suspects displaced the hand gesture, including the riots at the U.S. Capitol on Jan. 6.

It seems that both instances took place in 2019. The first took place at Universal’s Loews Royal Pacific Resort when Gru used the “OK” hate symbol in a photo with the child, according to a photo presented by the family. It was then said that the young girl brought the photo to school to share with the class, but was not allowed to due to the hate symbol being displayed through Gru’s hand gesture.

The second instance did not have as many details as to what happened, but simply that the photo was taken and the hand gesture was used. Both families are suing for over $30,000 due to “mental anguish, loss of dignity, humiliation, embarrassment and other emotional distress” caused to the young girls due to the incident.

Universal did fire the Team Member after the news came to light. The employee’s name remains unknown.

When the news broke in 2019, USA Today spoke with the parents, which you can watch below. The video also has footage of Gru placing his hand on the child’s shoulder and then forming the hate symbol.

Universal Orlando Resort is a very inclusive theme park, and the actions of the now-fired Team Members should not be a reflection on the theme park as a whole. As we previously discussed, Universal did take action to ensure that Team Member not only never did that again but terminated their employment.