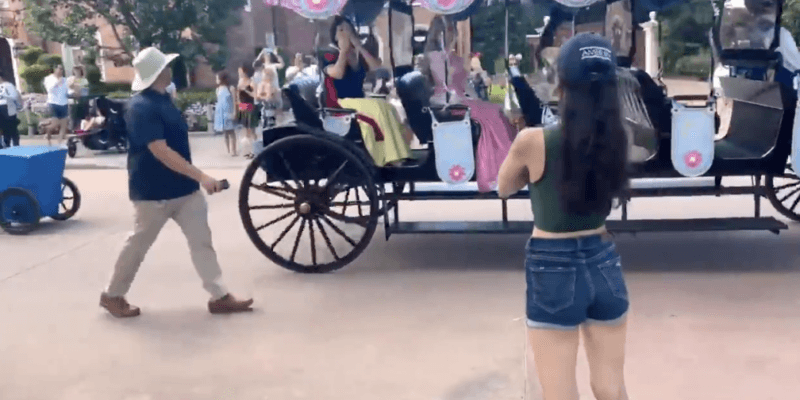 Related: Heartbreaking Theory Explains Why Grumpy From ‘Snow White’ is a Grump

Zegler — previously shared that she felt “weird” about seeing Snow White at Walt Disney World Resort’s Magic Kingdom Park — recently had a fun interaction with the Disney Park Princess! She posted on Twitter:

“had to go straight to the source”

had to go straight to the source pic.twitter.com/5xf7MUCpXO

The video sees Zegler having a heartwarming interaction with Snow White, who was riding in a character cavalcade with Princess Aurora/Sleeping Beauty and Princess Belle.

The actress also posted a reply to the video:

shoutout to the incredible bridal party i met who took this video for me — thank you for inviting me to your wedding. i wish i could make it.

Little is known about the live-action remake of Snow White and the Seven Dwarfs at this time. Per IMDb, Marc Webb (500 Days of Summer, The Amazing Spider-Man) will direct and the anticipated release date is sometime in 2022.

Previous Disney Princess live-action adaptations, including Cinderella (2015) and Aladdin (2019), have included some elements from the classic Walt Disney Animation Studios films, but have also expanded on characters’ backstories.

For example, we learned more about Cinderella’s (Mia Wasikowska) relationship with her father before he passed away and Lady Tremaine had full control over her life, and we discovered details about Princess Jasmine’s (Naomi Watts) role in Agrabah before she met and married Aladdin.

If you want to rewatch the original Snow White and the Seven Dwarfs — the movie that was known as “Walt’s folly” because nobody believed a full-length animated feature would be a box office success in the 1930s — you can stream it anytime on Disney+.

Forever enchanting and inspiring, Snow White and the Seven Dwarfs embodies The Walt Disney Signature Collection’s legacy of animation. In this epic story of love and friendship, the kind and beautiful princess Snow White wins the hearts of the Seven Dwarfs and triumphs over the evil plans of a wicked Queen. Discover the movie called “The Greatest Animated Film of All Time!”

Are you excited about the live-action Snow White movie?