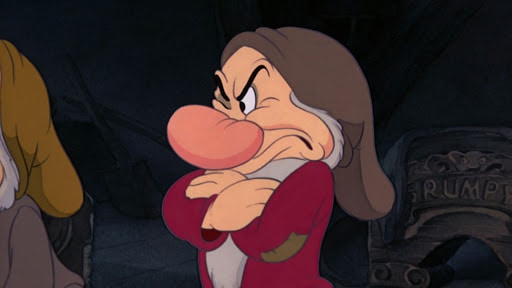 Disney fans love to develop theories that explain the backstory of many animated characters or connect them to other films.

Many Pixar films are riddled with easter eggs in which fans can pull apart and dissect, and in the more recent Disney animation films, we are starting to see a lot more of this as well. For example, in the opening credits of Princess and the Frog, we can see Aladdin’s magic carpet draped over a banister. However, some theories aren’t concrete, but Disney fans still love to examine the possible validity.

One of those theories explains why Grumpy from Snow White and the Seven Dwarfs is so grumpy! When someone watches the film for the first time, they may not look for a deeper meaning behind the emotion of each dwarf, but Reddit user GreenKeyLimeQueen has come up with the reason Grumpy is such a grump.

So I am sitting here watching Snow White and was at the party scene with the piano playing and singing.

It seemed kind of odd that Grumpy, who seems a bit of a loner, loved to play the piano.

To me, the enthusiasm he showed while playing seems to be from maybe a part of himself he used to have.

Which begs the question how did Grumpy get so grumpy? My tiny probably wrong theory is Grumpy lost a romantic partner or wife.

Either by them leaving or passing away I think. It would explain his sour demeanor and his shunning of love or mushy stuff.

What do you guys think?

How did Grumpy get so grumpy? from DisneyTheories

Interestingly enough, this backstory checks out if we look at Grumpy’s character in the hit series Once Upon a Time. In the show, Grumpy’s name was once Dreamy when he was in love. However, after losing that love, the character became filled with anger and, from that point on, would be called Grumpy!

If this explanation is correct, it is quite sad to know that Grumpy is so burdened with the feeling of losing a loved one.

What do you think of this backstory for Grumpy? Let us know your thoughts in the comments below!