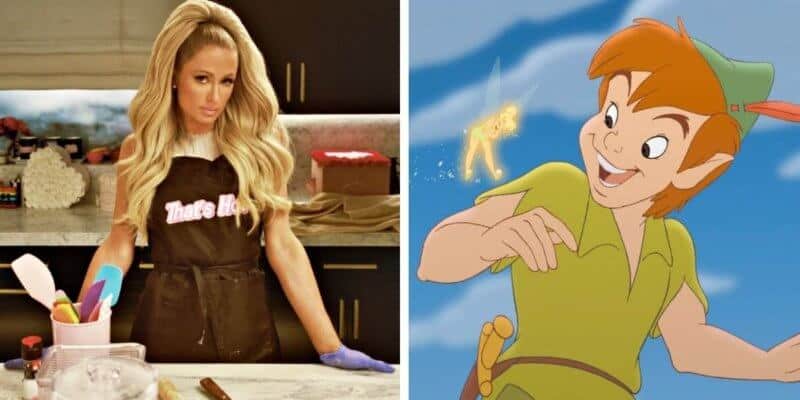 One celebrity that continuously proves her love for Disney is a reality TV star, actress, singer, and DJ, Paris Hilton.

Paris was quickly thrust into the spotlight at a young age, and through her show, The Simple Life quickly gained her own notoriety in Hollywood. Paris has since shown she is a huge Disney fan. She visits the Disney Parks often, so much that she has worn prosthetics to stay incognito so that she can enjoy the Park like anyone else, and named her dog Tinker Bell!

Now, Paris is starting a new venture and adding “chef” to her long list of definers. On August 4, Cooking with Paris will debut on Netflix, where Paris will cook us some delicious foods alongside celebrity Guests. During an interview for the show, Paris was asked what fictional characters she would host at a dinner party, and not surprisingly at all, almost all of the names are Disney characters.

Barbie, Tinker Bell from Peter Pan, and Ariel from The Little Mermaid. I’d make them cupcakes and angel food cake.

Aside from Barbie (who arguably is still a little Disney as she makes an appearance in the Toy Story franchise), all of the characters are from Disney films Paris loves. Of course, we know she is a fan of Peter Pan from her dog’s name, but it seems she is a big fan of The Little Mermaid.

As much as Paris loves these characters, it seems that they would be on a strict dessert diet, being from the world of fantasy! It would be pretty fun to watch Paris re-create this idea in her new show, it seems like a tea party setting would fit this eclectic group well, and then Paris can show off her cupcake decorating skills; or perhaps lack thereof!

What fictional characters would you invite to a dinner party if you had the choice?