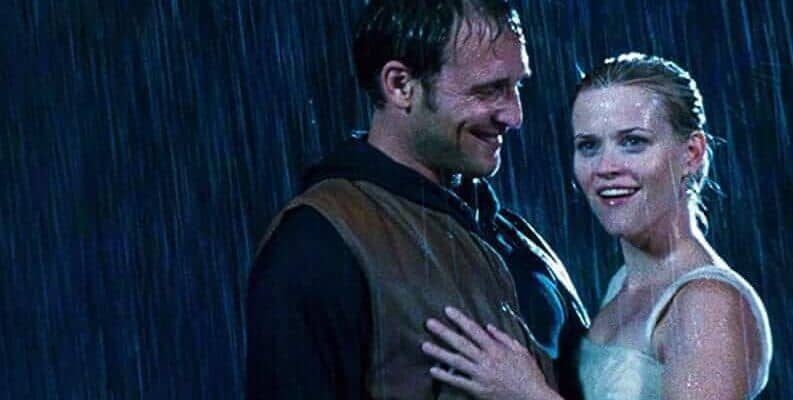 50-year-old actor Josh Lucas has recently spoken out about why, exactly, a sequel to Sweet Home Alabama (2002) — his iconic romantic comedy with Draper James founder Reese Witherspoon — hasn’t happened yet.

“Look, I would love to do the sequel. The issue is Reese’s [Witherspoon] got a book club. And I’m saying that like laughingly, but Reese is, you know, I’ve heard like, ‘Oh, you can talk to her about stuff five years from now.’ You know, she’s a mogul.”

Lucas went on to say:

“And back when I was doing Sweet Home Alabama, I, for some reason, remember telling the director or somebody speaking about her, but I said, ‘I bet this woman ends up running a movie studio one day.’ And she’s even beyond that at this point. … I mean it’s extraordinary and not surprising either, at all.”

Related: Dempsey Arrives For ‘Disenchanted’ Filming – “This Place is Incredible”

Witherspoon herself also has a soft spot for the Southern romance movie. During an August 2016 Facebook live chat, the Big Little Lies star said:

Sweet Home Alabama was made by Walt Disney Company subsidiary Touchstone Pictures, which has been effectively replaced by 20th Century Studios and Searchlight Pictures as the label behind Disney’s more mature films.

At one point before the buyout, director Andy Tennant had already developed a concept for a sequel film. In April 2019, Lucas told Good Morning America:

“I’ve absolutely said yes. He [Tennant] and I discussed it extensively so we’re lobbying the world to join us…[the plot] which was quite interesting, is that my character is back in Alabama and Reese’s character is in New York with our kids and we’re divorced, so [their] whole life is super complicated.”

“I kind of love the idea that they have actually divorced and been divorced for a while and he wants her back. Kind of to realize what he’s lost again and that the kids even, that their lives have separated in some ways, and I think that’s sort of the magic of that story is that there’s an eternal love there. That bond that they have. Even when they’re apart, there’s something connected about the two of them. And that they’ve had it since they were little kids.”

Related: You Could Star in Disney+ Sequel With Patrick Dempsey, Amy Adams

D23 officially describes the movie as:

New York fashion designer Melanie Carmichael suddenly finds herself engaged to the city’s most eligible bachelor. But Melanie’s past holds many secrets, including Jake, the redneck husband she married in high school, who refuses to divorce her. Bound and determined to end their contentious relationship once and for all, Melanie sneaks back home to Alabama to confront her past. A Touchstone Picture. Released on September 27, 2002. Directed by Andy Tennant. Stars Reese Witherspoon (Melanie Carmichael), Fred Ward (Earl), Mary Kay Place (Pearl), Patrick Dempsey (Andrew), Josh Lucas (Jake), Jean Smart (Stella Kay), Candice Bergen (Kate), Ethan Embry (Bobby Ray). 109 min. Ethan Embry, as Ethan Randall, starred with Reese Witherspoon years earlier in A Far Off Place. The film crew was one of the few ever allowed to film in Tiffany & Co. in New York City. Filmed in CinemaScope. Released on video in 2003.

Are you onboard for a Sweet Home Alabama sequel almost 20 years later?