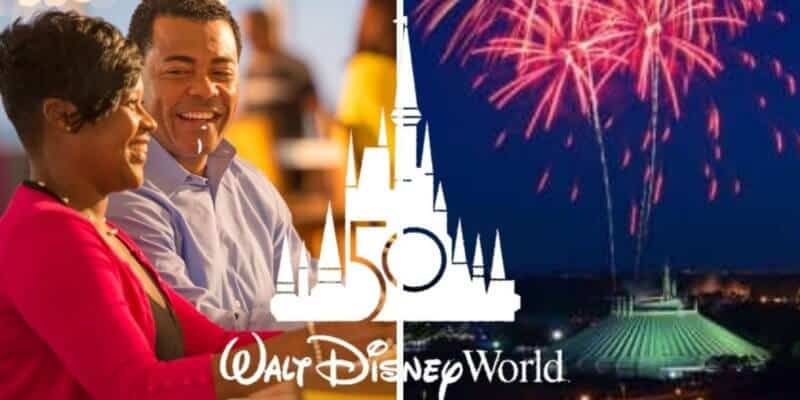 On October 1, 1971, Magic Kingdom at Walt Disney World — The Most Magical Place on Earth — opened to the public, and before we knew it, it became one of the most popular vacation destinations around the world. Now, here we are, nearly 50 years later!

Beginning on October 1, 2021, Disney World will be bringing a party to the parks to celebrate the 50th anniversary of Walt Disney World.

But that’s not all because Disney also confirmed a new nighttime spectacular — Disney Enchantment — coming to Magic Kingdom as well as the long-awaited debut of EPCOT’s HarmonioUS — both of which will debut on October 1, 2021 specifically for the Disney World 50th anniversary celebrations.

On top of these new fireworks shows, we now know that Disney will also be bringing a special dining experience to one of the Magic Kingdom Resort hotels, again, specifically for the 50th anniversary.

California Grill, located in Disney’s Contemporary Resort, will not be accepting bookings after October 2, 2021 as Disney is creating a special dining experience just for the 50th anniversary!

California Grill is currently unavailable for bookings after October 2 as we create a special dining experience for the 50th anniversary celebration of Walt Disney World Resort.

What this means is if you want to dine at California Grill prior to the new dining experience, make sure to grab your dining reservation for a day prior to October 2. At this time, we do not know additional details of the special dining experience coming to California Grill later this year, but Inside the Magic will update you as we get information.

California Grill is described by Disney as:

Experience the flavors of the Pacific Coast at this award-winning restaurant.

Via private elevator, ascend to the 15th floor of Disney’s Contemporary Resort, where you’ll discover exquisite panoramic views of the shimmering lagoon, Floridian woodland and Cinderella Castle. Inside, enjoy the vibrant sights and sounds of the lively onstage kitchen, where chefs combine global flavors in deliciously inventive new ways.

Californian cuisine celebrates fresh, seasonal ingredients and the international, melting-pot culture of the Golden State. Changing seasonally, the menu may include such specialties as handmade Sonoma Goat Cheese Ravioli and Oak-fired Filet of Beef.

Delight in mouthwatering sushi, as well as flavorful brick oven-fired pizza. Then, polish off a perfect meal with decadent desserts like Warm Valrhona Chocolate Cake.

To complement their entrées, Guests 21 years of age and up can select from over 300 hand-picked wines—most of which are from California. Over 50 are available by the glass, and sommeliers are on hand to offer pairing suggestions.

Will you be visiting Walt Disney World for the 50th anniversary? Do you want to dine at California Grill once the new dining experience debuts? Let us know in the comments below.

If you want to visit Disney World for the 50th or dine at California Grill once the new dining experience debuts,  be sure to get in contact with our friends at Academy Travel who will help you book your hotel reservations, Park Pass reservations, and dining reservations! Start planning your magical vacation by clicking here.