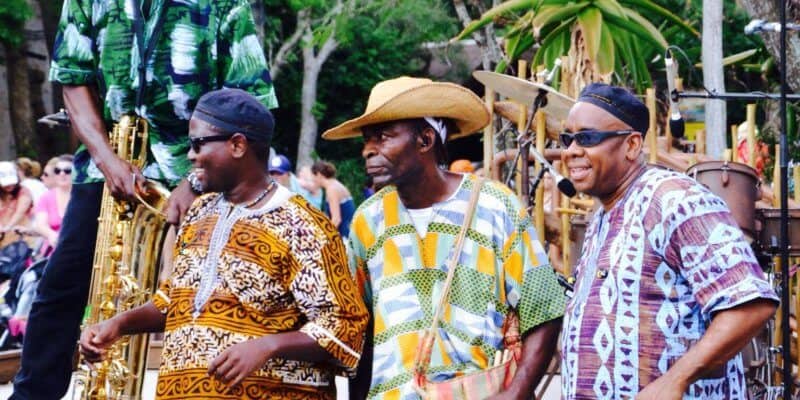 When visiting Disney’s Animal Kingdom, many Guests prefer making Kilimanjaro Safaris one of their first stops. Did you know that the reason for this is that most of the animals are lively, awake, and out exploring the Savannah?

While Guests make their way through the Harambe Village, The Wassalou Afropop band invites everyone to stop and enjoy their colorful costumes and traditional music that transports you right into Africa! Since the pandemic, this beloved Animal Kingdom band has disappeared from the Harambe stage, but we now have confirmation that this band will be celebrating its return in a brand-new location, Disney Springs!

When it comes to magic in Animal Kingdom, I cannot stress enough how amazing this band is. Wassalou’s uplifting music brings crowds in and invites Guests to sing along and will even teach visitors some African-inspired dance moves and invite them to dance alongside the band.  For a moment, you almost forget you are in a theme park.

We speculate that Wassalou will not make Disney Springs their permanent home, but it is very exciting to hear that they will be performing once again, as they have been a huge part of Disney’s Animal Kingdom experience.

Today on Facebook, Wassalou announced “Jambooooo everybodyyyy!! Wassalou is back at Disney Springs in July!! Come catch us on the following nights!! July 1, 17, 20 & 29”

No location or times have been announced through Disney or Wassalou’s Facebook page so keep an eye out for this band around AdventHealth Waterside Stage located at the Marketplace in Disney Springs or speak to a Cast Member for more information.

It is very clear that Walt Disney World is preparing to bring back all the magic in the parks this year. Live shows and entertainment such as The Festival of Lion King in Disney’s Animal Kingdom and fireworks in Magic Kingdom are a huge testament that our beloved Resort in Orlando will return to normal very soon!

Have you ever experienced Wassalou in Disney’s Animal Kingdom? Do you believe the park isn’t the same without them? Let us know your thoughts in the comments below!

Want to visit Walt Disney World soon and don’t know where to start with regard to planning? Our friends at Academy Travel are EarMarked Diamond!

Comments Off on Fan Favorite Animal Kingdom Band Is Heading to Disney Springs!