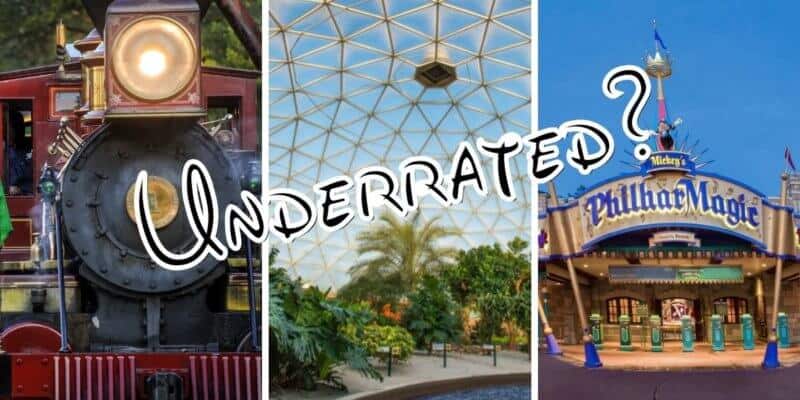 Walt Disney World is filled with several unique rides, perfect for all ages. From Magic Kingdom classics including Haunted Mansion and Pirates of the Caribbean to newer attractions such as Frozen Ever After at EPCOT and Mickey and Minnie’s Runaway Railway at Disney’s Hollywood Studios, there is a wide variety of rides to choose from.

But there are also several rides that some fans feel don’t get enough attention or appreciation! Here are the top underrated rides according to Disney World fans.

One of the top responses was Living with the Land! In fact, the Reddit user (IcyDragon232) who started the thread put this as their top underrated ride:

Underrated: Living with the Land! This is my pick for the most underrated ride in all the parks. Never a long line, another thing to do around Soarin (for instance, if you have reservations at The Garden Grill or want to wait a few minutes to see if the Soarin wait time decreases), gives a respite from the heat, genuinely interesting and you actually learn something. It makes me want to try the Behind the Seeds tour if it returns.

Living with the Land is one of my favorites! Vastly underrated.

Agree completely on Epcot. We all need the experience of Living with the Land, it should inspire people to engage in vertical farming when they get home.

Other top responses for Magic Kingdom, in particular, included the Tomorrowland Transit Authority PeopleMover, Carousel of Progress, and the Walt Disney World Railroad, all of which a few different users commented about. SnuffFilmStar said:

Peoplemover is a nice preview of everything, it’s like the Tomorrowland trailer. Carousel of Progress is a classic and a treasure. WDW Railroad is amazing because if you use it like a mode of transportation to bypass walking through crowded thoroughfares, it saves a lot of time, frustration, and your ankles will thank you (less strollers and carts hitting you and less chop walking).

And KingHarambeRIP said something similar, writing:

MK – Peoplemover – Underrated to the general park goer, not to this sub which rightfully adores it [Honorable mentions – WDW Railroad, Carousel of Progress]

Mickey’s Philarmagic was another top response for Magic Kingdom, as IcyDragon232 points out:

When moving to Hollywood Studios, a few fans made mention of Star Tours, even comparing it to Millennium Falcon: Smugglers Run. Reddit user, bijouforever, expressed:

I love star tours more than Smugglers run. Star tours is so cool and has a different experience each time . When I finally got to pilot Smugglers run I was nauseous for hours .

jacobi_chris also put this as their most underrated ride at Hollywood Studios, commenting:

HS – Star Tours always has short lines and is still a great ride. I thought Smugglers Run was a bit overrated for the long wait times.

One user, AnotherLolAnon, pointed out that Na’vi River Journey may not be as exciting as Avatar Flight of Passage, but it is very underrated:

AK- Navi River. A lot of people get in a long line in Pandora and then are disappointed when it’s not a FoP tier ride at the end. I understand that. But this is a great ride. It’s beautiful and so zen. I love it every time.

What do you think is the most underrated ride at Disney World? Let us know in the comments below.

If you want to visit Disney World on your next vacation to check out some of these underrated rides, start planning today!