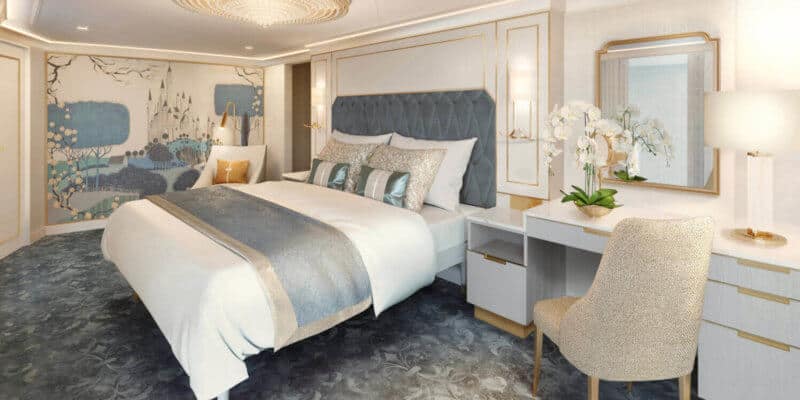 Disney Cruise Line fans have been waiting a long time to board Disney’s newest ship, the Disney Wish.

As a result of the COVID-19 pandemic, the first Triton Class cruise ship — which will ultimately be joined by two sister ships — faced construction delays at the Meyer Werft shipyard in Germany.

Now, the cruise line has an official maiden voyage date in June 2022, and eager Disney lovers can even tour a full stateroom a year ahead of time! Meyer Werft now has a complete Disney Wish verandah stateroom on display, if you happen to be in Western Europe anytime in the near future.

Recently, a reader visited the Jos L. Meyer Werft shipyard in Papenburg, Germany. During the self guided tour they were able to see the inside of a verandah stateroom room which was on display.

Disney Cruise Line has commissioned MEYER WERFT with the construction of three new ships, and the first will be delivered in 2021: Disney Wish. It’ll be the first vessel in the Disney fleet to feature an eco-friendly LNG drive system.

MEYER WERFT built two cruise ships for the American shipping company back in 2010 and 2011: Disney Dream and Disney Fantasy. They became the largest ocean liners ever built in Germany at the time of their completion. And the three vessels in the Triton Class will be even bigger.

Further details on the new ships are yet to be released, but we do know the cartoon character Rapunzel will add a touch of magic to the luxury liner’s hull.

The two other ships in the Triton Class will be delivered by MEYER WERFT in 2022 and 2023.

Previously, Disney Parks Blog shared exciting details about the staterooms onboard the Wish, giving Guests an idea of what they can expect even if they can’t visit the model that is currently available to tour in Europe:

New for the Disney Wish, Walt Disney Imagineers have imbued every stateroom with the soft, dreamlike worlds and restful imagery of enchanted Disney fairytales through glittering gold-leafed headboard murals and framed pieces commissioned exclusively for the Disney Wish.

In line with the ship’s overall design motif of enchantment, stateroom artwork will represent classic and contemporary Disney stories that capture the essence of wish fulfillment and dreams come true, such as Cinderella (whose maxim “a dream is a wish your heart makes when you’re fast asleep” is particularly fitting).

Beyond the artwork, every detail has been designed to tell a story, from pixie-dusted furnishings to delicate linen embroidery inspired by the fleet’s signature golden filigree. This even extends into the corridors, where exquisite decoration serves the greater purpose of wayfinding: Richly themed carpeting, softly colored accent walls, magical lighting and unique adornments will provide guests with an intuitive yet artful cue to know they’ve arrived at their home away from home.

The luxury cruise ship will join the other vessels in Disney’s fleet — the Disney Dream, the Disney Fantasy, the Disney Magic, and the Disney Wonder.

The Wish is set to be based at Florida’s Port Canaveral and will make Bahamian sailings, with stops including Disney’s private island, Castaway Cay, and Nassau.

The ship is set to feature a number of brand-new Disney Cruise Line experiences, including the first-of-its-kind Star Wars Hyperspace Lounge for adults, a reimagined Oceaneer Club for kids, an incredible theatrical Frozen dinner experience for families, and a first-ever funnel suite themed to Moana!

Do you plan to cruise on the Disney Wish next year?

Whether you have a future cruise credit or you want to book a new itinerary, the experts at Academy Travel can help you plan your next magical Disney Cruise Line or Disney Park vacation!