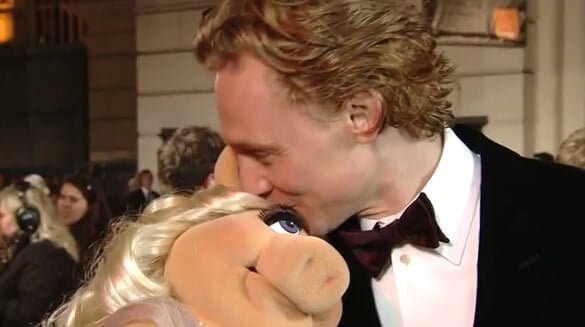 He may currently play the perpetual villain who could be good, but usually chooses to be bad, but Tom Hiddleston is a real softie — especially when it comes to Muppets. He has a deep love for one Muppet in particular: the incredible diva herself, Miss Piggy.

The two first met at the 2012 BAFTAs where Hiddleston told her that he had been in love with her all of his life.

Hiddleston recently sat down with the D23 Inside Disney podcast and spoke about a number of things, including how much love he had for the iconic Muppet. He was asked if they kept in touch after meeting at the 2012 BAFTAs — and he admitted the shameful truth.

” You know, I am ashamed to say, I haven’t, and I don’t know how Miss Piggy feels about this, but I feel embarrassed right now just thinking about it because, you know, what’s the point in making connections if you’re not going to sustain them? But you know, Miss Piggy’s got a busy schedule, I know she’s got lots of friends and appointments to keep and places to be, and she’s a big star…I like to think that in that moment, we shared something real, at least I choose to see it that way…If you have her phone number or email address, please send it my way.”

Being the forgiving person that she is, Miss Piggy took to Twitter to let the Loki actor know that there were no hard feelings.

Dearest @twhiddleston it was so nice hearing your stunning voice on this podcast (although why any star does anything where their face isn’t seen is beyond moi). I’m NEVER too busy for vous! Have your people call my people. In fact, have the #Loki casting director call my people!

Dearest @twhiddleston it was so nice hearing your stunning voice on this podcast (although why any star does anything where their face isn’t seen is beyond moi). I'm NEVER too busy for vous! Have your people call my people. In fact, have the #Loki casting director call my people! https://t.co/i0UxRZavNU

It seems as though Hiddleston and Miss Piggy have an unwavering love for each other and their people definitely need to be in touch with each other. Who wouldn’t love to watch a movie starring these two powerhouses?

Hiddleston’s love for The Muppets extends beyond Miss Piggy. The actor starred in the 2014 film Muppets Most Wanted as The Great Escapo, alongside Piggy, Kermit, and the rest of the gang — an experience Hiddleston won’t soon forget.

“The Great Escapo may be the greatest moment of my career. That may be it, like you know, I was sharing the stage with Kermit the Frog. I don’t know if it gets, that may be the peak, don’t you think? I was actually starstruck that day.”

You can currently watch Hiddleston star in the most recent Marvel Studios series Loki, which is available to stream on Disney+. If you want to get your Muppets fix, there are a number of programs, also available on Disney+, including Hiddleston’s Muppets Most Wanted, Muppets Now, and Muppet Treasure Island.

Are you as big of a fan of Miss Piggy as Tom Hiddleston? Let us know in the comments!