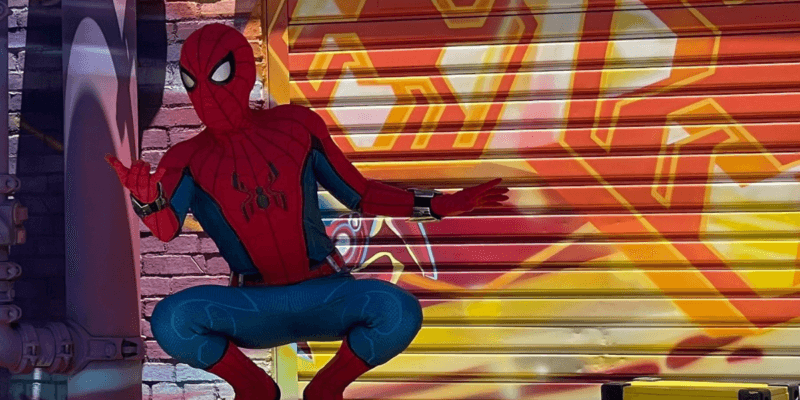 Guests visiting Disney California Adventure Park at the Disneyland Resort are experiencing an entirely new land from June 4 onward — as well as a Spider-Man “stuntronic” flying high above Avengers Campus.

Avengers Campus is home to the Earth’s Mightiest Heroes, including an all-new, groundbreaking attraction centered on your friendly neighborhood Spider-Man. While WEB SLINGERS: A Spider-Man Adventure features revolutionary technology that’s creating new, immersive experiences, the Spider-Man stuntronic is stopping people in their tracks!

While on your way to dine at Pym Test Kitchen or help protect the Sanctum Sanctorum with Doctor Strange, a Spider-Man robotic stunt figure flies above the WEB SLINGERS area of Avengers Campus.

You can watch Spider-Man fly above Avengers Campus below:

Inside the Magic’s Bailee Abell captured Spider-Man flying across the Avengers Campus sky on opening day. As Spidey soars,Guests gasp in excitement and awe!

We have arrived!!!! Thank you mobile order (that allowed us entrance into #avengerscampus).

Just before completing some impressive flips and interactive verbal quips high above Avengers Campus on a catwalk, Spider-Man runs off stage and preps his new suit for an impressive fly-by. The stuntronic then takes it from there and flips through the air while performing classic Spidey moves.

There’s no official schedule for Spider-Man’s special appearance, so be on the lookout for this impressive hero!

Nothing seems to beat seeing Spider-Man zoom through the Southern California sky. Orange County has a whole new Marvel land to welcome home, and Spider-Man is making that easy.

Disney fan Joshua Mellin on Instagram (@joshuamellin) shared an impressive edit of Spider-Man performing each move throughout the air.

The tech at this new attraction is truly worthy of the Stark Industries tag: the Spidey swing is performed by a “stuntronics” robot.

The crowds following the Spider-Man stunts are a show in themselves, as fans then disperse throughout the small section of Avengers Campus that is utilized for the viewing area of Spider-Man’s stunts (and, after, an encounter with Spidey himself, where fans can take selfies and say hello!

Before Avengers Campus concept art debuted at the 2019 D23 Expo, Walt Disney Imagineering gave a sneak peek into one of their newest creations: the stuntronic. Focused on providing a safe and efficient stunt double for super hero “animatronic figures that could take their place within a show or scene to perform more aggressive maneuvering, much in the same way a double replaces a valuable and delicate actor in a dangerous scene,” according to Tech Crunch.

“The Stuntronics robot features on-board accelerometer and gyroscope arrays supported by laser range finding. In its current form, it’s humanoid, taking on the size and shape of a performer that could easily be imagined clothed in the costume of, say, one of The Incredibles, or someone on the Marvel roster. The bot is able to be slung from the end of a wire to fly through the air, controlling its pose, rotation and center of mass to not only land aerial tricks correctly but to do them on target while holding heroic poses in midair.”

Disney influencer and co-creator of Best Life & Beyond on YouTube, @kthedisneybear, shared her excitement of being in Avengers Campus with an impressive Stark Infinity Gauntlet holding an ice-cold Coca-Cola.

You can see Iron Man in his Mark 80 suit throughout the Marvel land, and from the new attraction to multiple opportunities to meet your favorite Marvel super hero, Avengers fans are sure to make this new land home.

Guests visiting the Disneyland Resort are ready to experience one of the California theme park’s most immersive adventures to date, and the lines will keep on growing. Stay tuned with all of the latest updates on Avengers Campus on Inside the Magic!

Is the Spider-Man “stuntronic” amazing? Let us know in the comments below!

Comments Off on WATCH: Spider-Man Soars Over Disney’s Newest Land