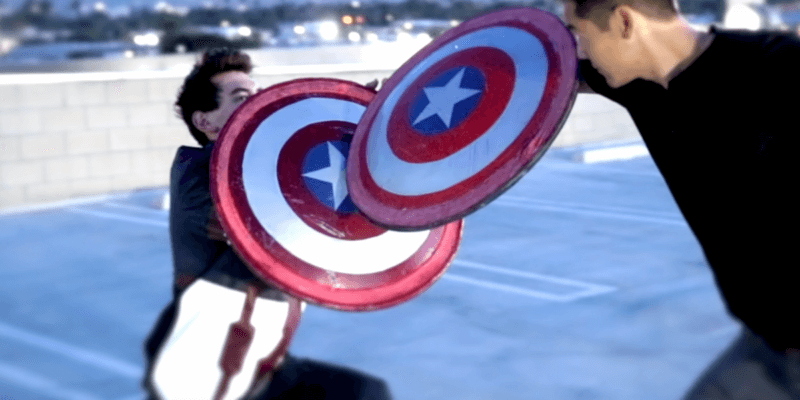 Marvel fans are undoubtedly loyal to the Marvel Cinematic Universe and never waste a second to dream up what living within one of their favorite superhero movies may be like. Whether it be recreating Iron Man’s suits or making their own short films, some Marvel fans go the extra mile to show their love for the franchise.

One fan has gone above and beyond by creating a real Captain America shield that actually bounces back to them and deflects objects.

In the YouTube video above by JLaservideo, Captain America megafan Jake uses his imagination and impressive building skills to whip up a working homemade shield that can bounce off of surfaces and attach to his magnetic wrist mount.

Most videos featuring a flying vibranium shield are overflowing with CGI and special effects, but this time we’re seeing a real fiberglass and carbon fiber shield flying through the air.

This video has gone mega-viral in the last week, with over 5.5 million viewers praising this impressive creation.

Related: Captain America’s Shield: What Is It Made Of?

The huge frisbee can fly over 100 feet and return to the arm of the person that originally threw it. Of course, it’s a bit flimsy, but we’re seeing a homemade Captain America shield actually fly!

We’ve seen shield fans make in their garage or workshops in the past, but they don’t typically bounce off of surfaces this well.

Towards the end of the video, the audience sees this shield deflect the likes of throwing knives and glass bottles, as well as defying the laws of physics here and there!

Undoubtedly a symbol of patriotism and hope, Captain America’s famous shield has stood the test of time in the Marvel Cinematic Universe and is as integral to Marvel’s legacy as Thor’s hammer Mjollnir or Iron Man’s suits. Steve Rogers, the First Avenger, is a favorite of Marvel fans for his bravery, dedication, and sacrifice for his team and country. His shield stood against the likes of Thanos and now a new threat in The Falcon and the Winter Soldier.

However, now we’re seeing a real Captain America shield ricochet off of the sides of buildings and back to its owner.

Would you buy a working Captain America shield? Let us know in the comments below!