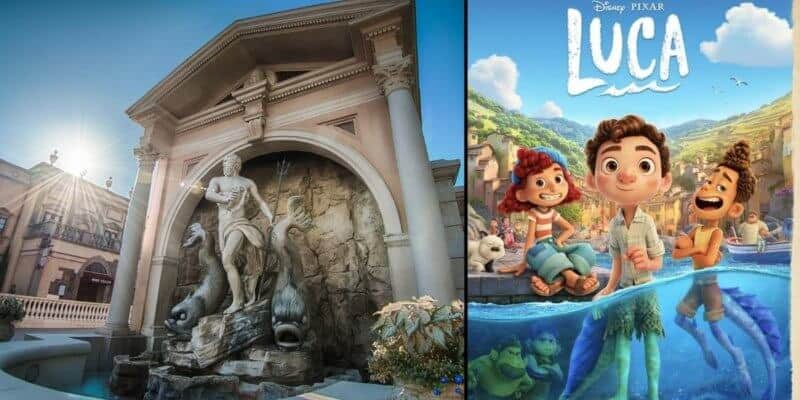 Disney and Pixar have done it again, releasing a heart-warming, tear-jerking and relatable film on June 18 to Disney+ called Luca, sharing the culture of Italy, summer friendships, and themes of acceptance.

Set in a gorgeous town, known as PortoRosso, this film is beautifully animated and was inspired by the beauty of Italy’s Riviera. Luca and his newfound friend Alberto find each other in the same predicament (being underwater sea monsters) and both curious to find out what PortoRosso offers while hiding their identity.

In the end, this film reminds us all about how to overcome prejudice and that determination despite all the odds can lead to amazing friendships. Opening our hearts to accept all that the world has to offer becomes a huge lesson in this Pixar film, but something else comes to mind.

While watching Luca, it instantly fills my heart with memories of endless European summer nights, gelato, delicious pasta, and Vespa rides which got me thinking, wouldn’t it be amazing if we could experience Luca‘s heartwarming parable and expand Italy’s Pavilion?

Bring Luca to Italy in EPCOT

It seems that I am not the only one who has already thought of this idea. After watching the film, it inspired many Disney fans to voice their opinions and state that having an attraction based on the film, with the inspiration of a Vespa ride through the rustic seaside would in fact boast more Guests to enjoy this pavilion in EPCOT at Walt Disney World.

@ThatDisneyBoi on Twitter took it upon himself to construct a diagram of where PortoRosso and the Vespa ride would go and stated,

Don’t get me wrong, this is one of my favorite pavilions in the world showcase, and I personally do not want anything to replace what this area already offers! For those who have never been, Italy’s Pavilion showcases the gorgeous city of Venice with Venetian bridges, gondolas, “Fontana de Nettuno” a fountain inspired by Bernini’s Neptune fountain, and exact replicas of the most iconic buildings set in Italy.

Guests have enjoyed Italian cuisine from Tutto Italia Restaurant and the most mouth-watering and authentic pizza from Via Napoli, but it would be an amazing treat to see one of these restaurants feature the famous Trenette al pesto from the film Luca, or even add other small locations that sell rustic pasta dishes and other Luca inspired treats including PortoRosso’s gelato.

I could picture Massimo Marcovaldo, Giulia’s dad, owning his own restaurant inside Italy’s Pavilion with authentic seafood dishes (minus the Sea Monsters of course).

We have already seen such a wonderful addition to France’s pavilion with Remy being the star of the show coming soon and a small expansion with new Parisian French-inspired dining options.

As Disney is embracing more backgrounds and cultures through film, it would be nice to see these pavilions In Walt Disney World have their own attractions based on Disney and Pixar films we all know and love. As we prepare for the grand opening of Remy’s Ratatouille Adventure debuting October 1, it will be a huge testament to see just how busy France will be and will hopefully inspire Disney to develop new ideas like Luca in Italy.

Do you think Luca would be a great fit inside Italy’s Pavilion? What could you see Disney bring to this specific pavilion? Let us know your thoughts in the comments below!