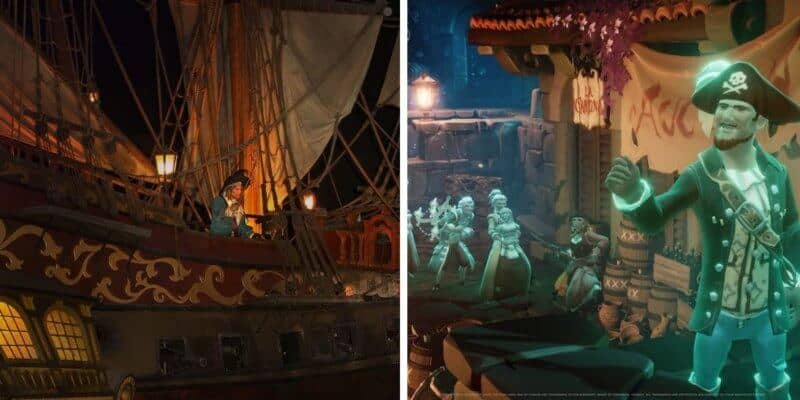 One of the worst things about visiting Disney World, Disneyland, or any Disney Park is that at some point, you will have to leave!

Dealing with the Disney blues is something almost all Disney fans have to face, but there are ways to kick that sadness out and turn it into magical reminders of happiness. From adding Disney decor to your home to watching Disney attraction videos on YouTube, there are many options available for fans to be reminded of the magic.

Now, there is a new video game that may not only help with the Disney blues but will allow fans to dive deeper into an attraction that Walt Disney himself created. Sea of Thieves: A Pirate’s Life was just released as a collaboration with Disney, and the video game follows Jack Sparrow’s adventures that we have seen in the Pirates of the Caribbean attraction.

Although the video game takes inspiration from the films, it seems that the aesthetic and setting are very much based on the Disneyland version of the attraction. Players will not only feel like they are in the ride while playing, but they will be able to explore rooms and show scenes that, typically, a Guest would only get to watch from their boat!

If you think that riding the Pirates of the Caribbean attraction immerses you into Jack Sparrow’s treacherous world plagued by scoundrels, this game will take that immersion to a whole new level. It showcases several iconic scenes from the original 1967 Pirates of the Caribbean attraction in Disneyland park, like the Treasure Room, the Ship Battle, and— my personal favorite— the Jail Scene featuring the dog holding the keys to freedom. Pirates fans can adventure and explore through these well-known scenes brought to life in the game in beautiful detail and truly authentic to the classic attraction. The exciting new gameplay experience casts YOU, the players, as the main characters within this adventurous world!

Many Disney fans would love to explore all of the different details on the Pirates of the Caribbean attraction, and it seems that this video game is a pretty close second to actually being able to do it in real life!

Disney Parks (@disneyparks) TikTok made a video that shows a side-by-side comparison of the video game and the attraction, and some scenes look identical to the ride.

You can explore ✨iconic✨ scenes from #PiratesOfTheCaribbean in Sea of Thieves: A Pirate’s Life ?‍☠️

As someone who played VMK (Virtual Magic Kingdom) in its heyday, I can say that Disney fans definitely need more theme park-based video games, as it allows us to explore the parks even if we can’t be there in person. Sea of Thieves: A Pirate’s Life is available on mobile, Windows PC, Steam, and Xbox.

We have also discussed how the game brings back Jack Sparrow into the Pirates of the Caribbean franchise but does so without Johnny Depp. Read more about that here!

Would you want to play Sea of Thieves: A Pirate’s Life knowing it allows you to explore classic areas of the Disneyland Pirates of the Caribbean attraction?