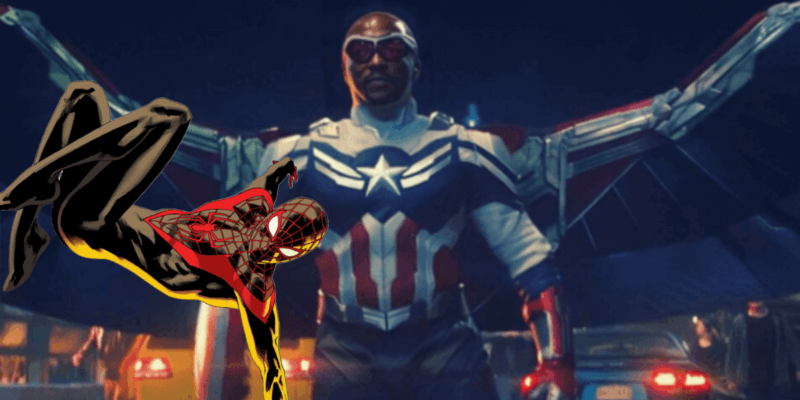 Another day, another Marvel crossover.

Fan-favorite character Miles Morales is set to take on the iconic role of Captain America in a new Marvel event that’s been 80 years in the making.

Miles Morales first came on the Marvel scene in 2011 as the new Spider-Man replacement when Peter Parker died. Miles was 13 years old when he took up the mantle of the friendly neighborhood Spider-Man, and the character also signaled a new direction for Marvel with Miles being of Black American and Puerto Rican descent.

Now, the fan-favorite character — who rose to further prominence in Sony’s Spider-Man: Into the Spider-Verse (2018) — is set to take on a new iconic superhero. In the new Captain America variant cover of Miles Morales: Spider-Man, the web-slinging hero can be seen donning the famous stars and stripes. The Miles Morales comic book series began back in 2018, but this latest issue promises to be an emotional conclusion to a huge Clone Saga event. As the synopsis reveals:

THE CLONE SAGA REACHES ITS CATACLYSMIC CONCLUSION! Selim was cloned and raised to be the perfect super-soldier for hire. Miles has trouble just getting to class on time. Selim’s scruples are also vastly different than Miles’… so Miles’ family is in horrific danger. YOU DO NOT WANT TO MISS THE MOST HEART-WRENCHING COMIC OF THE YEAR!

The stunning Captain America and Miles Morales crossover variant cover will hit stands in July to celebrate Cap’s 80th anniversary, but shortly after Miles himself will be celebrating his own milestone as it will be 10 years since his initial inception. Birthdays all around it seems!

What is the Captain America Anniversary event?

Back in December last year, Marvel announced their huge collaborative Captain America comic event to celebrate the 80 year anniversary of their leading star-spangled super-soldier. In their own words:

In March 1941, comic book legends Jack Kirby and Joe Simon introduced the world to Steve Rogers in the historic CAPTAIN AMERICA COMICS #1, and a pop culture icon was born. Now, Marvel is proud to honor their tremendous contribution to the comic book industry with CAPTAIN AMERICA TRIBUTE #1, a giant-sized special celebrating the character’s 80th anniversary.

The Legacy of Captain America

Jack Kirby and Joe Simon originated Captain America for Marvel Comics’ predecessor, Timely Comics. In 1960, Kirby joined forces with Marvel legend, Stan Lee, where he co-created some of the franchise’s most influential superhero characters such as the Fantastic Four, Hulk, Iron Man, and the X-Men.

The Captain America character has gone on to become one of the world’s most recognizable icons. With many comic book stories featuring the patriotic superhero including the memorable Avengers and Civil War arcs, Captain America also became a huge part of Kevin Feige’s Marvel Cinematic Universe.

Gaining worldwide recognition when Chris Evans starred as Captain America in the film, Captain America: The First Avenger (2011), the actor went on to star in two more sequels as well as in every Avengers movie since 2012. The mantle of Captain America, as well as Captain America’s shield, was most recently handed over to Anthony Mackie’s Sam Wilson/Falcon in Malcolm Spellman’s, The Falcon and the Winter Soldier — which also starred Bucky Barnes actor, Sebastian Stan — and the character is set to appear in the fourth film installment of the franchise sometime in the future. Mackie will mark the MCU’s first Black Captain America.

What’s next for Miles Morales?

While Miles Morales lives on in the Marvel Comics, the character gained worldwide recognition in Sony’s Spider-Man: Into the Spider-Verse (2018). The Marvel animated movie went on to win the Academy Award for Best Animated Picture in 2019 beating out Disney and Pixar for the first time since 2011.

Due to its immense commercial and critical success, a sequel film is slated for release in October 2022, with another spinoff, Spider-Women, also in the works for the Marvel universe.

Are you excited to find out what happens to Miles Morales next?

Comments Off on Marvel Shakes Things Up, Turns Miles Morales Into Captain America