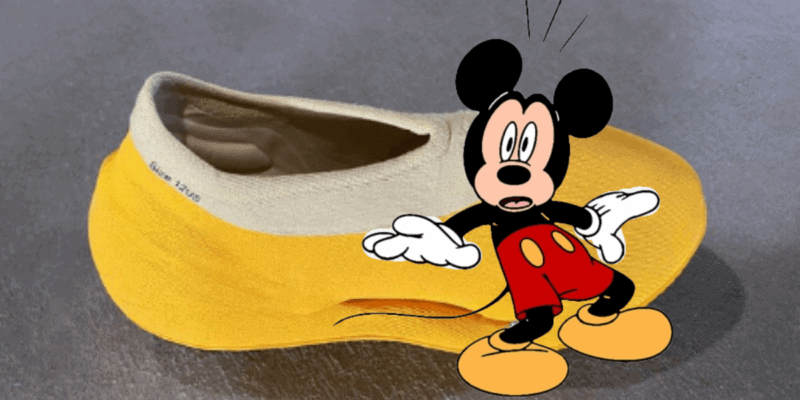 Sneaker aficionados took to social media in droves to lampoon controversial rapper, Kanye West, comparing his latest wild shoe design to the recognizable shoes of Disney icon, Mickey Mouse.
Kanye West — celebrating his 44th birthday on June 8th — has overseen the highly successful Yeezy footwear line with sneaker giant Adidas since 2013. The brand is extremely popular with sneakerheads all over the world. Shoe enthusiasts regularly line up for days outside of stores prior to a release, or stalk online resellers for a chance to pay nearly a thousand dollars a pair for the latest look from the self-proclaimed “voice of this generation”.
Last year, Kanye West released the Adidas Yeezy Foam Runner — hyper-stylized, pseudo-futuristic clogs — that sold out quickly after being featured heavily on the Instagram page of West’s estranged wife, Kim Kardashian. The shoe had also been teased on reality show juggernaut Keeping Up With the Kardashians, bolstering the unusual Croc cousin’s appeal.
Kanye West, Kim Kardashian West, and the Kardashian crew are famously fans of Disney, known for taking frequent family outings to Disneyland. Kim and Kanye celebrated the birthday of their daughter North, and have also experienced VIP tours at the happiest place on earth.
But is Kanye West a big enough fan to bite the style of Mickey Mouse?
New images have surfaced of Kanye West’s latest effort, the Adidas Yeezy Knit Runner. The variation of last year’s Yeezy release feature a fully knitted upper. Yeezy Mafia, a website dedicated to Yeezy releases with a twitter following upwards of 600,000 sneakerheads, first shared the upcoming “case power yellow” colorway, writing,

The sniper6 shared a gif of Mickey Mouse from Mickey and the Roadster racers as he pads down a busy sidewalk on a scooter, sharing his astonishment that Disney’s main mouse was able to score a pair of Yeezys prior to their release, saying,

No Ketchup On Hotdogs predicted that the cartoonish shoe would still be successful despite the initial internet backlash, sharing,

Kanye West fan A A hopped on Twitter to share a gif of the new-look Mickey Mouse as featured in the Walt Disney World attraction, Mickey & Minnie’s Runaway Railway. With an image of Mickey clopping along in his golden footwear, AA said,

“If you see me in the streets like this, keep walking.”

If you see me in the streets like this, keep walking. pic.twitter.com/Rt02j64Pue

Yeezy Mafia notes that these shoes are a prototype, rather than a finalized design. Will Adidas re-think their Mickey Mouse style shoe? Or will they lean in, hoping to capture the dollar of Disney diehards? From Yeezy Mafia,

“The YEEZY KNIT RNR in “Case Power Yellow” will release tentatively in fall 2021/early 2022, with an exact date to be announced later. For that info and all things YEEZY, keep it locked to YM.”

Kanye West has been in the news a lot of late due to his high-profile divorce from Kim Kardashian. The couple share 4 children — North, Psalm, Chicago, and Saint — and publicly split in early 2021 after nearly seven years of marriage. Rumors are swirling that the Grammy Award-winning rapper West is currently dating model Irina Shayk as the divorce proceedings continue.

Kim Kardashian West shared a photo of her children on Twitter on June 7, with the simple caption, “Baby Love.”

The split between Kim Kardashian West and Kanye West follows a tumultuous period for the rapper behind smash hit songs like “Gold Digger” and “Stronger.” In 2020, West held a wandering press conference, where he made several confusing and inaccurate claims regarding Black History, that left many fans concerned about the rapper’s mental health. Kim Kardashian West defended her husband at the time, revealing that the media provocateur suffers from bipolar disorder.

Also, in 2020 following backlash for his support of President Donald Trump, Kanye West announced that he no longer supported Trump. Instead, he declared himself a third-party candidate, joining the presidential race against Donald Trump and current President Joe Biden — despite missing several deadlines for presidential ballot eligibility and failing to correctly file nomination papers.

West even went so far as to argue that Mickey Mouse may have actually signed his nomination papers.

Despite the media gaffes and often disturbing behavior, many faithful still miss the old Kanye, as fans took to Twitter to celebrate Kanye’s June 8 birthday, with #Kanye44 trending on Twitter in honor of the performer’s 44th birthday. Twitter user M A S H A, tweeted his support of the pop culture titan with several photos of a West, captioned,

“Happy birthday #KanyeWest! You are a true inspiration. Thank you for saving my life.”

Happy birthday #KanyeWest ! You are a true inspiration. Thank you for saving my life. pic.twitter.com/ArUoPWsNpI

How much would you spend for a pair of Mickey Mouse shoes designed by rapper Kanye West? Let us know in the comments!