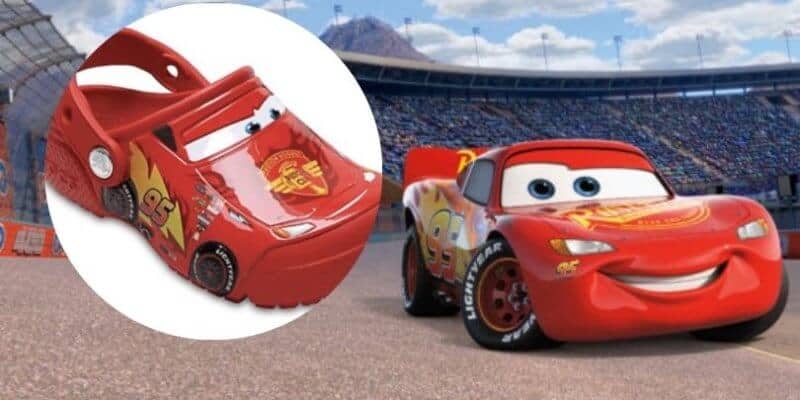 Speed. Faster than fast, quicker than quick. I am… Crocs?

Disney recently released Cars-themed Crocs in adult sizes and they sold out at lightning speed. Now, some are reselling these extremely popular Lightning McQueen Crocs for an unbelievable price.

“Lightning McQueen Crocs” is trending on Twitter today as Disney and Pixar fans have taken to the social media channel to publicly mourn the lightning-fast sell-out of the adult-sized comfy shoes, touting a light-up feature like their child-sized counterparts, and featuring the hero of the Cars franchise, Lightning McQueen.

Now the reselling market is hawking the bright red crocs for upwards of $300 after an initial asking price of $50.

Crocs announced the speedy sell-out — gone in less than one hour — via their official Twitter account, setting off an outpouring of FOMO from disappointed Lightning McQueen fans hoping to score a pair of Disney/Pixar limited edition clogs, teasing a pending restock, saying:

UPDATE: Disney and Pixar Lightning McQueen Adult Clogs are sold out. For now…

UPDATE: Disney and Pixar Lightning McQueen Adult Clogs are sold out. ?? For now…

Twitter user LaTera Allen reported being stuck in traffic on a virtual queue for more than two hours before the line was paused, saying:

I have been in the Lightning McQueen Crocs line since 10am…I better get some shoes ?? pic.twitter.com/omj9MacUXt

The overwhelmed virtual queue paused for many customers, as the paused line was a common complaint. Madis & Jordynne couldn’t understand their misfortune, as they Tweeted:

So we are paused…: ON CROCS i just want lightning McQueen crocs

So we are paused…: ON CROCS I just want lightning McQueen crocs pic.twitter.com/aYxsAgmdSC

Of course, what trending top would be complete without being properly immortalized by Squidward? ClockOutWars shared a pic of the dejected SpongeBob grouch while Tweeting:

The Lightning McQueen crocs really sold out while we were in line.

The Lightning McQueen crocs really sold out while we were in line. pic.twitter.com/JlySVotyGT

Not long after the Lightning McQueen Crocs sold out, the item began to appear on the resale market for extremely inflated prices. We found one eBay seller, alej_zuni, with a Buy It Now price of $350. Best Offer was also available.

Another eBay seller, val_1517 is offering a slightly cheaper Buy It Now price of $220.

Twitter user The Real Machiavelli shared a video of a scroll through the high-priced eBay listings and said this could be the beginning of a dark turn for him, Tweeting,

“This is the beginning of my villain arc nobody speak to me. These Lightning McQueen crocs meant everything”

This is the beginning of my villain arc nobody speak to me. These Lightning McQueen crocs meant everything ? pic.twitter.com/mmZlE9qJz8

A Disney and Pixar fan circulated a petition in 2019 demanding that the children’s light-up Lightning McQueen Crocs be made available in adult sizes. Miraculously, the petition collected over 33,000 signatures after going viral and successfully persuaded Crocs to release the coveted Cars (2006) merchandise.

As the voice of Lightning McQueen, Owen Wilson might say, “Wow!”

You can keep an eye on the Crocs official webpage for the Disney/Pixar collab for the restock they hinted at. Register your email address and get updates on a Lightnin McQueen restock and all future collabs. There is currently no description of the item on Crocs website. In its place, is simply a line of text reading “SOLD OUT.” However, from our previous reporting on the topic, we have the official description of the children’s version of the clogs.

“Boys and girls, start your engines! Crocs Fun Lab is back with another spin on the legendary Cars Clog to keep the little speedsters in the family on track, lap after lap. All of the comfort and support of a daily driver is here — this clog is light, easy to wear, quick to dry and cushiony thanks to the legendary Croslite™ foam construction. See you at the next pit-stop!

Would you buy a pair of Lightning McQueen Crocs for $300? What character would get you to spend that much on clogs? Let us know in the comments!

Comments Off on Re-Sellers Charging HOW MUCH For Sold-Out Disney Crocs?!