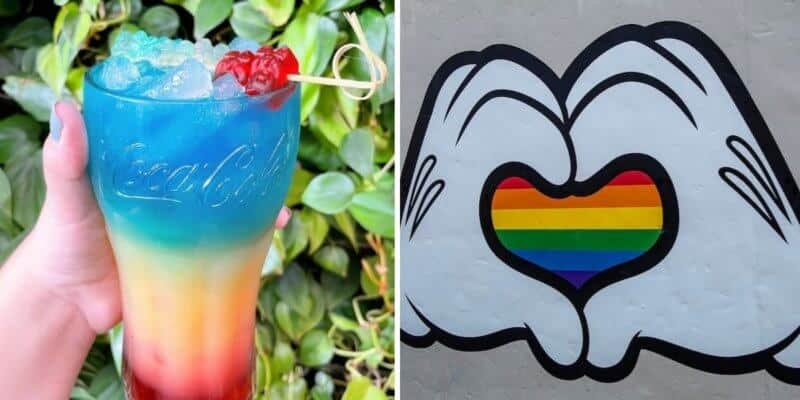 With Pride month underway and Disney Parks commemorating it all throughout June, Guests can join in the celebration in a variety of different ways!

From exclusive merchandise to a variety of food options, Disney has a plethora of offerings for Pride. One of the offerings that many people are discussing is the colorful drinks found at the Coca-Cola Store in Disney Springs. Perfect for Instagram, the Simply Rainbow cocktail can be purchased on the rooftop bar at the shopping location.

Related: Disney Rides Transform to Include Colors of the Rainbow For Pride Month

The drink has abundant bright colors such as red, yellow, and blue, and contains simply orange, Tito’s vodka, blue curaçao, and grenadine. Considering the drink is only available this month, it is a must-do for many!

Chrsitina (@Otownfork) posted the delicious drink on Instagram and after taking a look, we are already making plans to visit Disney Springs as soon as possible!

Now that it’s June it’s officially Pride Month! ? in honor of pride month @cocacolastore in @disneysprings released this beautiful Simply Rainbow drink. This drink was stunning, delicious, and had a beautiful gummy bear garnish which I was all about. They have an alcoholic and nonalcoholic version of the drink so anyone can try it and you get to keep the cup!
.
.
.
Pictured here is the Simply Rainbow drink which consists of Simply Orange, Tito’s Vodka, Blue Curaçao, and Grenadine. This drink basically tasted like an extra fun screwdriver. Overall a 10/10 would recommend!

Luckily for Guests, this is not the only food and beverage item celebrating the LGBTQ+ community this month. According to Disney Parks Blog:

With so many Pride offerings around Disney World property, Guests can enjoy the Most Magical Place on Earth and deliciously celebrate inclusivity!

Will you be celebrating Pride at Disney World? Let us know how in the comments below!