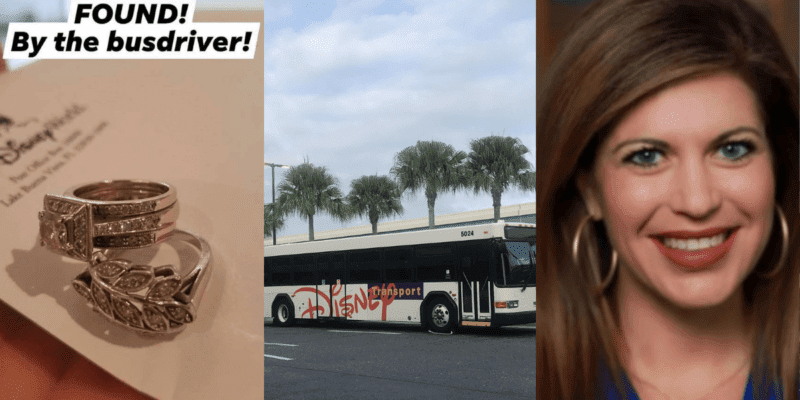 Disney Cast Members are the true magic makers of the Disney Parks and Resorts, and it really is true that they will do everything they can to ensure your vacation is magical. A Walt Disney World Resort Cast Member reportedly found a Guest’s wedding and engagement rings that had been left on a Disney bus.

News anchor and reporter for WBRC-TV, a local Fox News station in Birmingham, Alabama, Clare Huddleston (pictured above) recently traveled to Orlando, Florida, to visit Walt Disney World Resort. One day, while hanging out with her family in Star Wars: Galaxy’s Edge in Disney’s Hollywood Studios, Huddleston realized that her wedding and engagement rings were not on her finger!

Quickly, she recalled that she had left the rings at the bus stop in front of Disney’s Contemporary Resort — she had removed them to put sunscreen on her daughter, and in a rush to get all of her children onto the bus when it pulled up, she hadn’t noticed that she dropped her rings on the ground.

As soon as she realized that her rings were missing, Huddleston called her mom, who was still at the Resort, and was able to ask some Cast Members for help in finding the rings. As it turns out, Marty, a Disney bus driver, found the rings under a bench at the Contemporary Resort bus stop. Thanks to Mary, the rings are now back with their rightful owner!

Huddleston also shared the entire story on Facebook, which you can read below:

RINGS FOUND! This is a long story, but I want to give a shout out to a special bus driver at Walt Disney World and the entire staff at the Contemporary Resort ❤️

On Thursday we were heading to Hollywood Studios and I was putting sunscreen on Libby at the bus stop in front of our resort. I took my rings off and put them in my shirt in my lap. However, when the bus pulled up, I was in a hurry to get all the kids and the stroller on the bus that I stood up – forgetting about my rings – and loaded the bus ?

About 2 hours later we are standing in the Star Wars area of Hollywood Studios and I realized my rings were missing. I was devastated. I knew exactly what had happened. ?

Thankfully my parents had stayed behind that day to sleep in so I called my mom at the resort and asked if she would look at the bus stop for my rings and ask someone at the front desk if anyone turned them in.

Low and behold our sweet bus driver named Marty had found them under the bench at the bus stop and turned them in at the front desk!!! ????. I could not believe it when my mom told me!!!

When my parents got on the bus to meet us at Hollywood Studios she tried to give Marty a monetary reward, but he would not accept it. She took a selfie with him and posted the story on her Instagram stories.

Almost a week later I’m still counting my blessings. Obviously my engagement/wedding ring is super special to me, but the other ring is too because my grandmother gave it to me. I think my mom said it best in her post “honest and nice people still exist.” Thank you, Marty, for being honest and kind ❤️❤️

RINGS FOUND! This is a long story, but I want to give a shout out to a special bus driver at Walt Disney World and the…

Good deeds can go a long way, whether or not you are on a Disney vacation. Still, even though Disney World is the Most Magical Place on Earth, accidents can happen and unforeseen circumstances can occur. Guests like Huddleston are thankful for Cast Members like Marty who, time and time again, go the extra mile to make magic. Read another heartwarming Disney Cast Member story here!

How has a Disney Cast Member helped you while you were on a Disney vacation? Share your memories with us below!