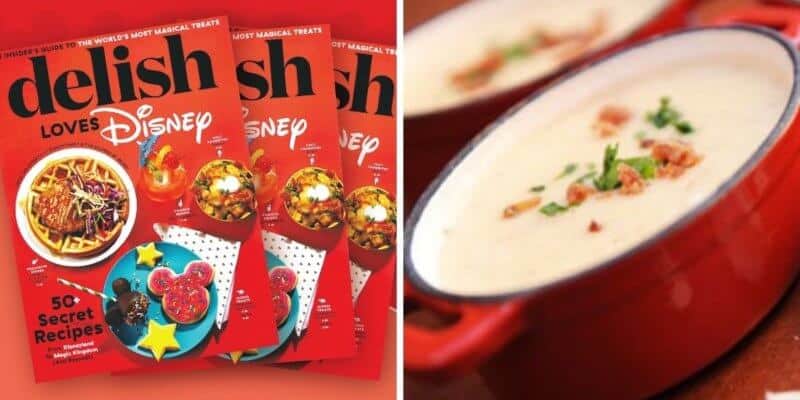 Last year, Disney brought foodies the ultimate Disney Magic Moment with the “Cooking up the Magic” series, where Disney shared a variety of Disney Parks recipes.

Now, Disney foodies should get excited because Disney is partnering with Delish on a brand-new cookbook called Delish Loves Disney, which will feature over 50 recipes from the Disney Parks!

One thing we know about Disney Parks Blog readers is that they LOVE a good recipe. We found that to be especially true when we started the Disney Magic Moments “Cooking up the Magic” series last year.

So, when our friends at Delish.com came to us with the idea of creating a special magazine featuring our iconic recipes, we jumped at the chance to share them with you.

Available only at Amazon.com, Delish Loves Disney is 100 glossy pages specifically created and curated by the editors at Delish, who have been writing and producing content about Disney Parks Food & Beverage for almost a decade.

Disney Parks Blog continued to share that Delish Loves Disney will feature over 50 recipes from Disney Parks and Resorts around the world!

Delish Loves Disney features more than 50 recipes from our parks and resorts around the world – including 15 never-before-published – with a mix of scrumptious entrees, iconic Disney Parks’ snacks and some of our most beloved items that feature a variety of healthful ingredients. It showcases how food and beverage is an integral part of the experience at our parks and resorts and we constantly strive to surprise and delight our guests with food and beverages that celebrate a variety of nutritious ingredients – such as seafood, legumes, and veggies – in a delicious way.

Working with our own Karen McClintock (author of all our Disney Parks Blog Foodie Guides), professionals around the world, the editors chose all the best dishes to spotlight – their favorites, our favorites, even some of their readers’ favorites, including Canadian Cheddar Cheese Soup from Le Cellier at EPCOT at Walt Disney World Resort, Ratatouille from Bistrot Chez Remy at Disneyland Paris and Filmore’s Pot Pie from Disney California Adventure park at Disneyland Resort.

The editors of Delish filled Delish Loves Disney with memories, anecdotes and feature stories about their experiences visiting and reporting on Disney Parks. There are pages featuring home-inspired Disney products that readers can use to make their favorite recipes from the book and a ton of “fun facts” about the recipes.

To accompany the book, the Delish team also has created a special landing page on their website which provides a sneak peek at the book, with links to videos and articles from their years covering yummy food & beverage offerings at Disney parks around the world.

Related: Disney Recipe: Make Yakisoba Noodles from Ohana In Your Own Home

Delish Loves Disney can be purchased through Amazon for $13.99.

Will you be purchasing Delish Loves Disney? Let us know in the comments below.