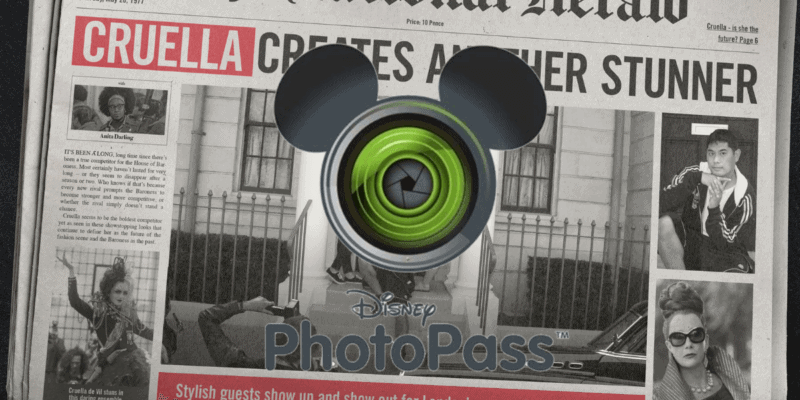 Disney’s newest film Cruella was released on May 28 both in theater and on Disney+ and quickly received rave reviews. People loved how dark Disney allowed the film to be — it was one of the rare Disney classic film twists with a PG-13 rating.

To celebrate the new film and its success, Walt Disney World is giving Guests a limited-time opportunity to be the star of their own Cruella photo shoot. Disney PhotoPass shared the magical PhotoPass opportunity on Twitter:

Through June 30, #DisneyPhotoPass photographers are offering a few show-stopping photo ops inspired by Disney’s #Cruella that make YOU the cover story: A Magic Shot in the United Kingdom Pavilion at EPCOT and a virtual backdrop at the Disney PhotoPass Studio at Disney Springs!

Through June 30, #DisneyPhotoPass photographers are offering a few show-stopping photo ops inspired by Disney’s #Cruella that make YOU the cover story: A Magic Shot in the United Kingdom Pavilion at EPCOT and a virtual backdrop at the Disney PhotoPass Studio at Disney Springs! ? pic.twitter.com/72oRlxMYcq

This new PhotoPass opportunity at EPCOT truly makes you the fashion icon of London, much like Cruella De Vil dreamed of being.

For those who have not yet seen Cruella, it tells the story of the young English woman who would grow to be one of Disney’s most iconic villains. The official description reads:

Cruella has been so successful that Disney has already green-lit a sequel film. Cruella stars Emma Stone as Cruella De Vil herself,  Emma Thompson as Baroness Von Hellman, Joel Fry as Jasper, and Paul Walter Hauser as Horace.

Cruella is currently available to watch on Disney+ only with Premier Access — which is an additional $30. The film will be available to screen for all users beginning August 27.

Will you be stopping by the UK Pavilion at EPCOT to take advantage of this fun PhotoPass opportunity? Let us know in the comments!

CLICK HERE to get started booking your magical Disney vacation today with our friends at Academy Travel!

Comments Off on Amazing New PhotoPass Opportunity at EPCOT!