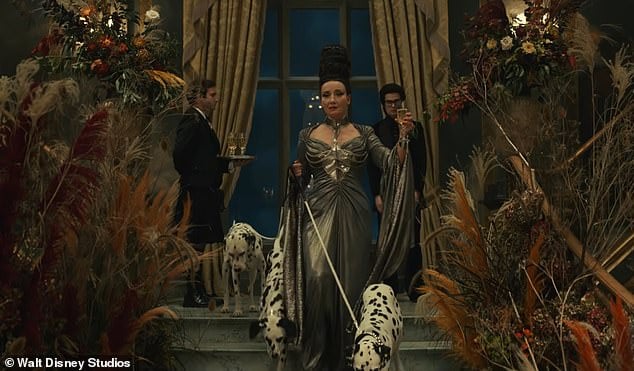 Disney’s Cruella will not come out until May 28, but the film already has its breakout star — Bluebell the Chihuahua, who played the character Wink. Wink is the adorable sidekick of Cruella’s accomplice, Horace. Bluebell was so adorable, in fact, that another Cruella star, Emma Thompson — who plays Baroness Von Hellman — joked about wanting the pooch fired.

While talking about the film in a virtual press interview, the actress talked about how she felt about just how adored the little Chihuahua was.

“Yeah.  I tried to get Wink fired.  I told stories.  I said he’d come and widdled on one of my costumes, and nobody believed me.  Um, yeah, they just knew I was lying and that it was just a vicious attempt to get rid of this dog that was, frankly, upstaging me and getting in my light.”

Pictures of the adorable dog were shared on Instagram by user Cruella_2021.

Emma Stone — who plays Cruella — agreed with the fact that Bluebell was the true star of the new Disney Villain prequel film. Stone made it clear what her feelings were when it came to the adorable pup.

“I’ve been jealous of Wink since day one, and I’ll say it right here.”

She then joked about Emma Thompson’s jealousy upon seeing the cute competition she was up against.

“We saw Bluebell and she was like, ‘You bitch.’  But that means female dog.”

With all of that jealousy and adoration, it seems that the next Disney prequel should focus solely on Wink and his life in London before he met Cruella.

Even with the competition of Bluebell, Thompson didn’t let that deter and put on a showstopping performance. Baroness Von Hellman will be a Disney Villain for the ages. Baroness Von Hellman is dark, driven, and will do whatever it takes to remain on top. Nothing will stand in the way of Thompson’s powerhouse character.

Disney’s Cruella will premiere in theaters and on Disney+ on May 28 and will also star Joel Fry as Jasper and Paul Walter Hauser as Horace. The film is directed by Craig Gillespie, who is currently directing the Hulu series, Pam & Tommy, starring The Falcon and the Winter Soldier star Sebastian Stan.

Will you be watching Bluebell in her role as Wink when Disney’s Cruella premieres on May 28? Let us know in the comments!