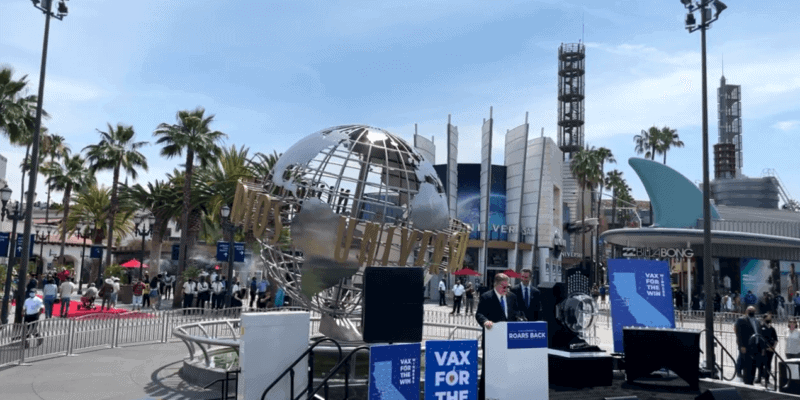 California is “roaring back” and fully opening — and so are theme parks. As of June 15, Disneyland Resort and Universal Studios Hollywood can lift their pandemic-era protocols. The Parks can operate at full capacity, eliminate social distancing mandates, and not require face masks.

But when it comes to Universal Studios in Los Angeles or Disneyland in Anaheim, which Park do you plan to visit first? One California state senator already has his eyes on a recently reopened theme park — and it’s not the Happiest Place on Earth.

In honor of the reopening of the State of California and to continue to promote COVID-19 vaccinations, California Governor Gavin Newsom held a press conference on June 15 at Universal Studios Hollywood in the heart of Los Angeles. He thanked NBCUniversal CEO Jeff Shell and the rest of the Universal Studios team for welcoming him to the Park on Tuesday.

California Senator and Senate Majority Leader Bob M. Hertzberg was in attendance, and he shared without hesitation the theme park he plans to visit.

“I am sorry, Disneyland. I am a San Fernando Valley guy, and now that we’re open, I’m going to Universal Studios!” Hertzberg said, to which it was met with cheers from the audience.

Clearly, there is demand for theme parks in California, and state officials, as well as Universal officials, are confident about it.

“I think we feel very good about demand here and we also kept building attractions. So we opened up a new attraction based on our Pets franchise for families and younger kids and it’s getting a similar reaction to the VelociCoaster so we have a new attraction here perfectly timed for the reopening here. So I’m very optimistic about the Park here in California and just the whole society opening up out here in California,” said CEO Jeff Shell on Monday.

Universal Studios Hollywood reopened on April 16 to California residents only, but soon after began allowing out-of-state Guests to visit the park as long as they showed proof of vaccination. Capacity was also limited for the past two months — but now, businesses in California, including theme parks like Universal Studios, no longer are required to limit capacity.

At this time, Universal Studios Hollywood is not required to limit capacity, implement social distancing measures, or implement face mask mandates. The Park does recommend for Guests who have not received a COVID-19 vaccine to wear face coverings, however, Universal is no longer asking any Guest for proof of vaccination, so this is based on the honor system. You can find the latest information on health and safety guidelines and operations on the official website here.

So, if you want to visit a theme park and, like Senator Hertzberg, Universal Studios Hollywood is your Park of choice in California, you can visit whenever you want — whether you are from California or out-of-state, vaccinated or not.

Do you plan to visit a California theme park anytime soon? Click here to book a trip and share your travel plans with us in the comments!