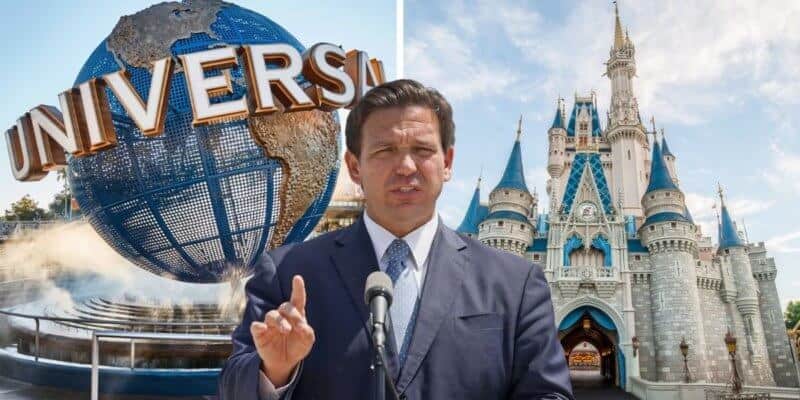 If you are a fan of both Disney World and Universal Orlando Resort, you may have been asked this dreaded question in the past: Universal or Disney?

Picking between arguably two of the biggest theme park moguls in the world is a difficult task, especially because of how different they are.

Disney World is a spectacle and a deeply immersive theme park resort for all ages, while Universal provides immersion while introducing Guests to a sense of thrill. Disney World may be the larger of the two, however, with Universal’s Epic Universe being built by 2025, soon Universal will have another theme park to stand on in this ultimate debate.

Hilariously, during a town hall, Governor of Florida Ron DeSantis played a quick-answer game where he was asked whether he prefers Disney World or Universal Orlando.

If you look at the below YouTube video at the 36:09 time stamp, you will hear DeSantis pick Disney over Universal!

The ongoing debate between Disney and Universal is something the theme parks have played into in the past, especially Universal. Universal Orlando Resort’s Twitter account constantly pokes fun at Disney. We recently saw many jokes sprung about May the fourth, a Disney IP which was heavily celebrated on May 4.

Universal has even mocked Disney on some of their attractions. The now-extinct attraction Twister used to have a set of Mickey ears being run over by a tire wheel in the pre-show for the attraction. Also, when Disney World released their concept art for Jungle Cruise, the two baby monkeys battling over a pair of underwear looked just like the two baby dinosaurs battling over a shirt on Jurassic Park River Adventure. Whether this was meant to be a direct poke at Universal was not said, but the resemblance is uncanny!

Personally, I am not a fan of the question, as I am a huge fan of both Disney World and Universal, and depending on the day, I may choose to go to either theme park! They are incredibly different, which is fantastic as it enhances the Guest experience because it gives us various options when visiting Orlando theme parks.

Now, to go against my better judgment, what theme park do you prefer? Disney World or Universal? Let us know in the comments below!