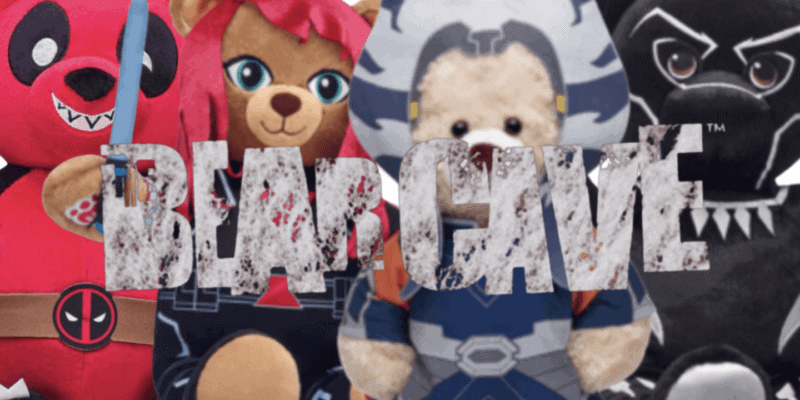 Everyone loves Build-A-Bear Workshop. As children, we have fond memories of going to the mall, picking out the best accessories, and completing “heart ceremonies” to bring forever-friends home. Now Build-A-Bear has launched a new its new Build-A-Bear Cave for bear lovers of all ages.

Related: This is the Way! NEW ‘Mandalorian’ Themed Build-A-Bear!

The Bear Cave is a place where fans, especially those aged 18+, can come to find all the licenses their nerdy hearts love. Build-A-Bear already had a collection from Star Wars featuring The Mandalorian — Din Djarin — himself and other Disney properties, like Winnie the Pooh. They’ve even branched out to other franchises like Lord of the Rings.

One of the most sought-after items in the new Bear Cave collection is The Child (AKA “Baby Yoda” AKA Grogu). His adorable eyes have people flocking to him right away. The official description of “Baby Yoda” — complete with pod stroller — from Build-A-Bear says:

Protect the Child at all costs! This officially-licensed plush accessory is inspired by the beloved bounty from The Mandalorian™. This adorable alien comes with its own plush pram for safe transport throughout your galaxy.

You can purchase him for $44.00 by himself or add his pram to bring the total up to $79.00. The new Star Wars collection also added former Jedi apprentice Ahsoka Tano – who fans also met in The Mandalorian as played by Rosario Dawson, and she even comes with her head tails, or lekku.

Build-A-Bear is getting into the Marvel game too. They’ve done it in the past with characters like Iron Man, Captain America, and even Captain Marvel. But they are adding new members to their Avengers roster now including Black Widow who has waited as long for this honor, just as Natasha Romanoff has for her own movie.

Her bear is described by the site as follows and is normally $35, but is currently on sale for $21:

They also added Black Panther to their site for $29. But, the true sign that Build-A-Bear is gearing this new line towards an older audience is the fact that they have added Deadpool (AKA the Merc with a Mouth) to their site. The normally R-rated character can be found in his adorable Pandapool version.

The deadly, but cute, assassin is normally $40 but currently on sale for $28! The Deadpool bear is described as:

The new collection even adds Doctor Who characters and students from each house from Harry Potter.

You can expect unexpected collabs, unique pop culture, luxe & giftable plush in The Bear Cave™. Shop the collection from Build-A-Bear.

Are you excited about the launch of The Bear Cave? Will you be ordering these new adults-only Build-A-Bear toys?

Comments Off on Build-A-Bear Unveils The Bear Cave, Just For Adults!