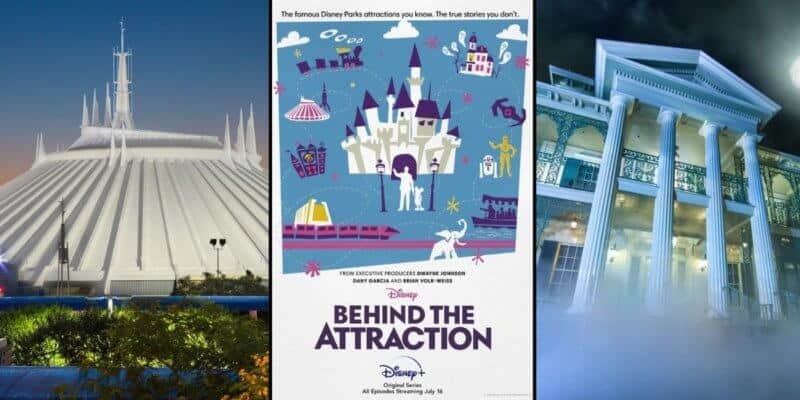 Well, hold on to your Mickey ears as you embark on a new journey called “Behind the Attraction” that will feature classic Disney attractions and many more in a 10 part series exclusive only to Disney+, executive produced by Dwayne “The Rock” Johnson, directed by Brian Volk-Weiss from “The Toys That Made Us” and narrated by actress and singer Paget Brewster.

In celebration of the release of the Disney feature film “Jungle Cruise,” featuring Dwayne “The Rock” Johnson and one of Disney most beloved rides that opened in Disneyland in 1955, The Jungle Cruise attraction, Disney+ will feature a series where viewers will hear unique stories and secrets about Disney attractions, transportation systems, Disney hotels and every Disney castle ever built by Disney Imagineers.

“Behind the Attraction” dives into Disney history and never before seen footage and photos! Check out more details of this new Disney+ series as Disney states:

Including rare interviews with Walt Disney, each episode also features exclusive interviews with Disney Legends and dozens of past and present Imagineers, including Bob Weis, Jeanette Lomboy, Kim Irvine, Scott Trowbridge, Tom Fitzgerald, Scot Drake, Carmen Smith, Joe Rohde, and others who divulge insider secrets of the parks and how iconic Disney attractions were brought to life.

Revealed for the first time are the wild stories of how the Haunted Mansion was filled with 999 happy haunts, how the Twilight Zone Tower of Terror™ transformed into Guardians of the Galaxy – Mission: BREAKOUT! (while defying gravity in the process) and why Space Mountain took so long to launch.

Even Dwayne Johnson could not contain his excitement today as he shared on Instagram this new Disney+ series he has been working on! Click the link above to hear more of this anticipated new show!

Are you excited to see this new Disney+ series, “Behind the Attraction”? Let us know in the comments below!