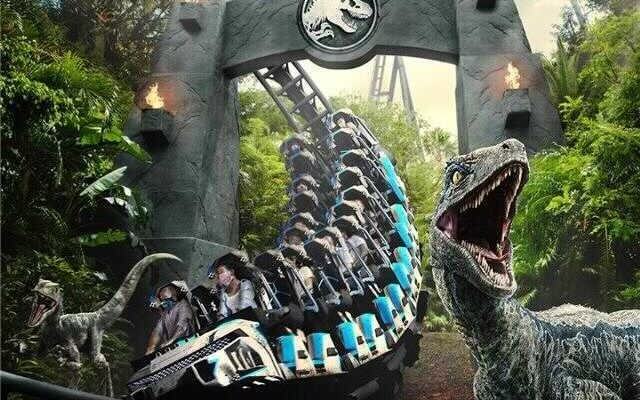 Universal Orlando Resort’s newest thrill ride, Jurassic World: VelociCoaster, will not officially open until June 1o, but the theme park has decided to do a soft opening and begin what is called “technical rehearsals” for the attraction, and fans were quick to swarm the ride queue. The roller coaster, which hosted Annual Pass Member previews earlier this week, is located in the Jurassic Park section of  Island’s of Adventure Park.

Throughout most of the day, the ride boasted a more than hour-long wait time. This is not surprising due to the high excitement surrounding the Jurassic World roller coaster. However, keep in mind that Universal Orlando is still operating at a limited capacity, so most rides do not have long waits, except for Hagrid’s Magical Creatures Motorbike Adventure — and now, the VelociCoaster.

Guests were posting to social media throughout the day, sharing their Jurassic World VelociCoaster excitement. Instagram user Jonathan Boggs (@jbboggs1) shares a picture from his spot in the long line:

Samantha Masone DiSibio was also lucky enough to ride the new roller coaster attraction and was sure to tell followers that it is a must-do:

Just got to ride Universal’s newest rollercoaster, Jurassic World VelociCoaster ??, while it is still in tech rehearsal! Let me just say, this coaster is AH-MAZING!! The details in the queue were on point ?and the length of the ride is perfect combined with the multiple negative g moments and inversions making this the ULTIMATE thrill ride at Universal!

The VelociCoaster is scheduled for its official grand opening on June 10 and is described by Universal Orlando:

Speeding through the jungle, rising high above the terrain, it’s the apex predator of roller coasters: the Jurassic World VelociCoaster. Now you can board your vehicle for a high-speed dash through the park’s raptor paddock. Feel the rush of the hunt as you race alongside these nimble predators, twisting and soaring above the land and water.

Universal Studios Orlando has recently relaxed some of its pandemic protocols — including eliminating temperature checks and reducing social distancing measures from 6 feet to 3 feet. The theme park has also opened up its single rider queues. VelociCoaster is using its single rider line for its soft opening. Guests filling up the single rider line was shared on Twitter by Theme Park Shark:

The single rider line at Velocicoaster is 100% in use. I’m proof… I’m in it! (Will be off and on throughout the day) What an attraction that Universal Orlando has on their hands!

The single rider line at Velocicoaster is 100% in use. I’m proof… I’m in it! (Will be off and on throughout the day)

What an attraction that Universal Orlando has on their hands! @UniversalORL #velocicoaster pic.twitter.com/pOXUD2cEeQ

Universal Orlando has not said how long these technical rehearsals for VelociCoaster will last, but again, keep in mind the coaster’s official grand opening is June 10.

Are you excited to ride the VelociCoaster? Have you already ridden it? Let us know what you thought in the comments!