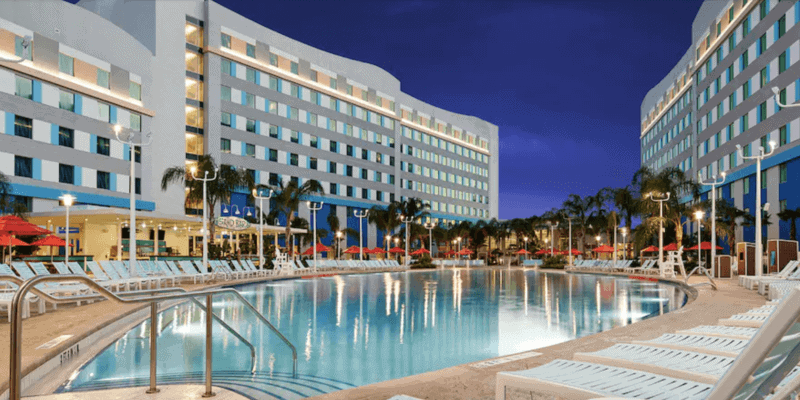 There are a number of changes that have been happening recently at the Universal Orlando Resort. Universal recently eliminated mandatory temperature checks and also decreased social distancing measures from six feet to three feet.

All of this could possibly be signaling that the Universal Orlando Resort could soon be increasing capacity — although a capacity increase has not been confirmed at this time. But either way, more and more travelers are visiting Orlando and wanting to head to the theme parks.

Today it was announced that Universal Orlando would be opening another one of its hotels beginning May 26 — Universal’s Endless Summer Resort – Surfside Inn and Suites. The Orlando Informer shared the news on social media:

This fun, family-oriented Value hotel introduces extra affordability to your Universal vacation. The feeling here is relaxed and easy, with a cool surf vibe woven throughout. In addition to beachy, surf-themed standard rooms, Surfside Inn and Suites features spacious, 2-bedroom suites that sleep up to six, making it the perfect spot for families of any size to experience a Universal Orlando Resort vacation.

At the time of this article’s publication, reservations at Universal’s Endless Summer Resort – Surfside Inn and Suites can currently be made for dates beginning June 6, but since the hotel reopens at the end of this month, we expect reservations for late May to reopen very soon. Rates begin at $129 per night.

As of this writing, the following Universal Orlando Resort hotel’s remain closed:

Opening dates for the above hotels have not yet been announced, but we will update our website as soon as more information becomes available.

Are you planning on visiting Universal Orlando soon? Let us know in the comments!

Click here to get started booking your Universal Orlando vacation today with our friends at Academy Travel!