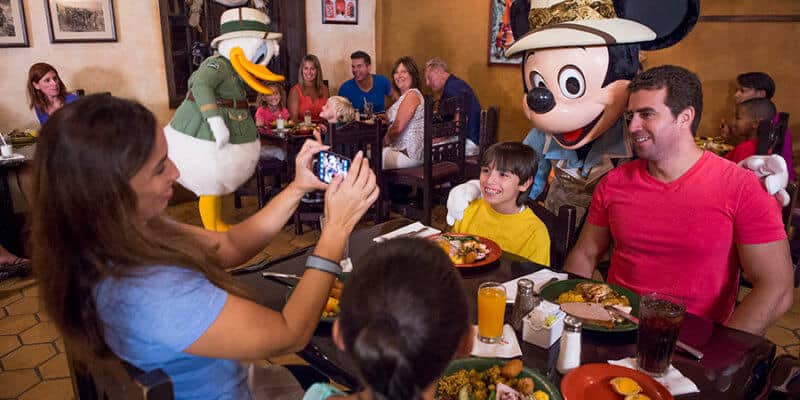 Character dining is a popular experience in Walt Disney World Resort. I mean, what else is better than dining with your favorite Disney pals?

Well now, Disney is bringing back another character dining location to Guests as the phased reopening of the theme parks continues — This time to Tusker House in Disney’s Animal Kingdom!

Related: Which Disney World Restaurant Will Bring Back Characters Next?

One of the major changes that Disney World has had to make when operating during the pandemic is modified character dining. In fact, characters no longer come around to Guests’ tables for autographs and photos. Instead, they will walk through the dining room and pose for socially distanced selfies with Guests.

The restaurants that have brought back modified character dining so far include Topolino’s Terrace, Garden Grill, Hollywood and Vine for Minnie’s Seasonal Dining, and Chef Mickey’s.

Want to book a Disney World vacation? Get started here!

Disney World Guests will once again be able to set foot inside Tusker House, but things will look a bit different. In fact, there will no longer be a buffet. Instead, Guests will enjoy family-style entrees inspired by the flavors of Africa.

Plus, Guests will still be able to spot some of their favorite Disney pals including Donald Ducks, as they make their way around the restaurant for socially distanced selfies.

The guest-favorite character dining location at Disney’s Animal Kingdom Theme Park, Tusker House Restaurant, will reopen this summer! During the modified character experience, guests will enjoy delicious family-style entrees inspired by the flavors of Africa and can snap photos of Donald Duck and friends, dressed in their safari best as they promenade through the restaurant. We will share more about the menu and reservation information soon.

We are excited to see what Tusker House brings Guests once they officially reopen. Stay tuned to Inside the Magic for all the latest Disney news.

Join Safari Donald Duck and friends at this colorful Harambe marketplace eatery for a wild Character Dining experience regardless of time of day—from breakfast and lunch to the family-style dinner buffet—all brimming with African flavor.

Walt Disney World reopened to Guests back in mid-July 2020 to once again bring Disney magic during this unprecedented time. However, with the phased reopening amid the ongoing pandemic came several changes in order to keep health and safety as the number one priority for both Guests and Cast Members. One of those changes included the suspension of character meet and greets and traditional character dining.

However, as the phased reopening at Disney World continues, the theme parks and resorts are continuing to make modifications, including slowly bringing back some of character dining experiences to select restaurants. Though these restaurants offer character dining, it is not like it was prior to the closures.

In fact, characters no longer come around to Guests’ tables for autographs and photos. Instead, they will walk through the dining room and pose for socially distanced selfies with Guests.

At the time of publication, the restaurants that have brought back modified character dining so far include Topolino’s Terrace, Garden Grill, Hollywood and Vine for Minnie’s Seasonal Dining, Chef Mickey’s, and Tusker House.

Are you excited to see Tusker House bringing back modified character dining? Let us know in the comments below.

Do you want to start planning a magical Disney World vacation and dine at Tusker House? Get started today!