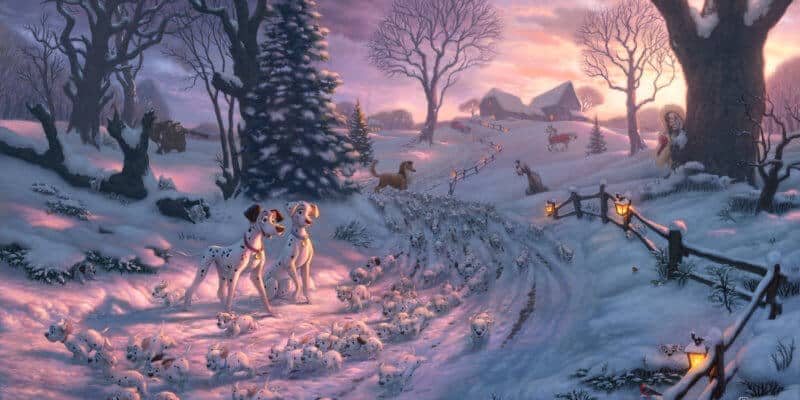 Congratulations to Rebecca M., the winner of this giveaway! If you are interested in more Thomas Kinkade Studios artwork, click here.

Grab your pup and a box of Kanine Krunchies and turn on 101 Dalmatians on Disney+ or order Cruella on Premier Access. It’s time to celebrate our favorite Disney dogs with another Inside the Magic Giveaway! This time, we are partnering with Thomas Kinkade Studios to give away a new painting: “Disney – 101 Dalmatians on the Run.”

The form to enter this giveaway for the new 101 Dalmatians Thomas Kinkade Disney art is at the bottom of this article.

Thomas Kinkade Studios is known for amazing and unique Disney artwork. The studios has an entire collection of Disney art that continues to grow every year, with new works that depict a variety of Disney characters and themes, from the Disney Princesses to Star Wars and even the magical Disney Parks like Walt Disney World and Disneyland. There truly is Thomas Kinkade Disney artwork for every Disney fan.

Below is a bit more information about the Disney art collection by Thomas Kinkade Studios:

Thomas Kinkade Studios portfolio of Disney artwork captures the beauty of Disney fans’ favorite movies and theme parks. Each Thomas Kinkade Studios Disney movie painting tells an entire story in one image, using the signature style of “narrative panorama”, and each Disney Theme Park painting captures the magic of favorite family memories. Thomas Kinkade Studios Disney art is available in a variety of gifts and collectibles, including Limited Edition Artwork, Canvas Classics, Gallery Wrapped Canvases, Framed Matted Prints, and more. Whether you love the Disney Princesses, Winnie the Pooh, or Pirates of the Caribbean, we offer artwork that touches the hearts of Disney fans young and old.

The latest sweepstakes from Inside the Magic and Thomas Kinkade Studios is a limited-edition art giveaway for the newest painting, “Disney – 101 Dalmatians on the Run” in honor of the release of the new live-action Disney film, Cruella. The prize is a “Disney – 101 Dalmatians on the Run” 12×18 Standard Number (SN) Framed Limited Edition Canvas, worth $830.

Thomas Kinkade Studios provides the following description about this magical work of art:

Love is on the run. Pongo and Perdita’s puppies have been freed and are on their way back to London with the help of some incredible friends. Collie and Colonel are ready to assist the puppies on their journey to freedom. Jasper and Horace have noticed Cruella de Vil stealthily skulking behind a nearby tree, plotting a way to recapture the puppies. In Disney – 101 Dalmatians on the Run, Thomas Kinkade Studios captures the love of Pongo and Perdita’s family and invites all to root for the puppies on their adventure.

This is also the second painting by Thomas Kinkade Studios that portrays the 101 Dalmatians — Pongo, Perdita, and their adorable puppies. The first masterwork — “Disney 101 Dalmatians” — was set in the sunny London suburbs. Now, “Disney – 101 Dalmatians on the Run” is a sweet addition to the collection. Plus, since it depicts all 99 Dalmatian puppies, it is the perfect work of art for any dog lover!

For all of the Disney Villains fans, there is also a hidden nod to Cruella de Vil. Here’s what Thomas Kinkade Studios shared:

Cruella de Vil’s car can be seen in the background. Animators of the 1961 classic film One Hundred and One Dalmatians used an innovative method to animate her car in motion, using a cardboard model, springs, string, and a sand-like substance to achieve the effect of driving through the snow. This technique was used in future Disney films, including The Aristocats.

Disney’s Cruella is now available to watch both in theaters and on Disney+ Premier Access. We absolutely love the film, and we are so excited that this 101 Dalmatians-themed artwork by Thomas Kinkade Studios is being unveiled to coincide with the new Cruella movie.

A live-action prequel feature film that tells the story of a young Cruella de Vil, the villain from 101 Dalmations.

In 1970s London, a young grifter named Estella (Emma Stone) aims to leave her mark on the fashion world amidst the backdrop of the punk rock revolution. Befriending a pair of thieves who share her predilection for mischief, the trio establish a life for themselves in London.

With their help and her creativity and wit, Estella catches the eye of fashion legend Baroness von Hellman (Emma Thompson) through her fiery flair. As von Hellman takes Estella under her wing, their relationship sends Estella down a dark path in embracing her cruel and wicked side and transforming her into the revenge-bent Cruella.

We at Inside the Magic are proud to share that we are partnering with Thomas Kinkade Studios for another amazing Disney art giveaway! In this new sweepstakes, one winner will receive a “Disney – 101 Dalmatians on the Run” 12×18 Standard Number (SN) Framed Limited Edition Canvas, worth $830! How amazing is that?

Enter to win using the form below. Be sure to use the same email when you come back and enter each day so that your entries accumulate and you have a higher chance to win!

Good luck! If you want to check out this painting and other works of art for sale, click here!