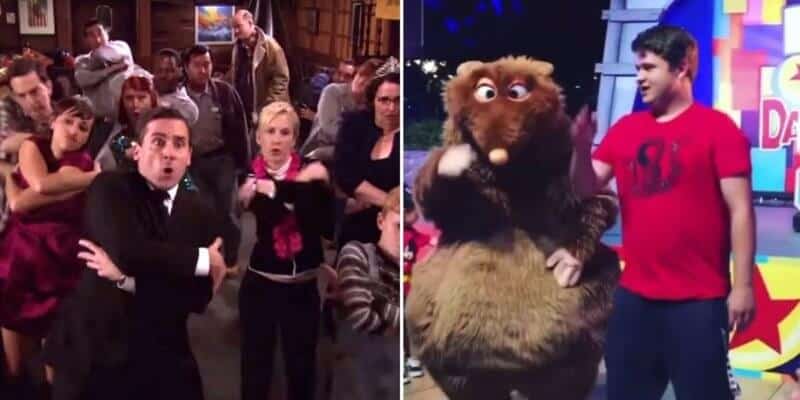 Every once in a while Disney will pull out all the stops and surprise Guests with new events and celebrations. Recently, Disney World announced a BOO BASH event replacing Mickey’s Not-So-Scary Halloween Party this year and a special celebration called Halfway to Halloween in preparation for a spooky October.

Back in 2018, Disneyland hosted an event called Pixar Fest that celebrated Pixar characters from films such as Toy Story and Monsters, Inc. This special festival included many spectacular treats and fun-filled events for a limited amount of time. We recently came across one great moment that happened in the Pixar Pals Dance Party at the Tomorrowland Terrace that was too good not to share.

That’s how you do “The Scarn”

Whether you are a massive Disney fan or a huge fan of The Office (the U.S. version), prepare to get this song stuck in your head for the rest of the week. During the Pixar Pals Dance Party that featured different Disney characters joining Disney fans in an evening dance-off, one Disney fan captured a very special moment of Emile, from Disney Pixar’s Ratatouille doing “The Scarn”.

When visiting a Disneyland event like this one, meeting up with exclusive and rare Disney characters are a treat in itself, but when a Disney character knows its pop culture and the dance steps from a non-Disney film, it creates more Disney magic than ever before.

Check out this amazing video that SnooRecipes5648 on Reddit shared:

Over in Walt Disney World Resort, Disney Guests are patiently waiting and ready for Disney World’s 50th anniversary and Remy’s Ratatouille Adventure, which will open in EPCOT this year.

Our favorite rats from Disney Pixar’s Ratatouille will be transformed into a trackless 4D dark ride attraction, which allows Disney World visitors a chance to scurry through Gusteau’s Restaurant inside France’s Pavilion.

This new attraction will be a close replica to the Ratatouille-themed ride in Disneyland Paris. It will feature a gorgeous Parisian-inspired courtyard and new dining option, La Crêperie de Paris, which will serve savory crêpes and French hard cider.

Although there has been no word on which Disney characters will be roaming around this French courtyard, we hope to run into Remy and his brother Emile while visiting EPCOT’s new and updated France Pavilion this year and maybe strike up some more dance moves while enjoying a crêpe or two.

Have you had a Disney character catch you off guard while visiting a Disney Park? Let us know in the comments below your favorite Disney Character memory!

Need advice planning your next Disney adventure? Our friends at Academy Travel can help and are EarMarked Diamond!