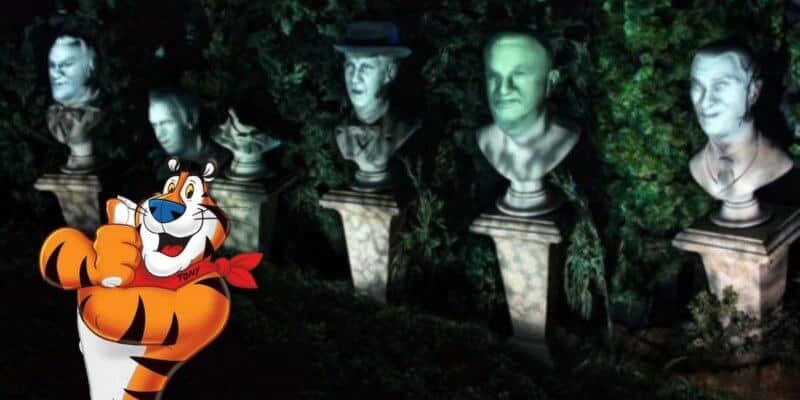 The Haunted Mansion is a popular attraction located in both Walt Disney World in Florida and Disneyland in California. The popular dark ride takes Guests through a mansion of haunted characters while riding aboard a Doom Buggy.

Singing Busts at the Haunted Mansion

Within the Haunted Mansion, Guests will experience the crypt doors creaking and the tombstones quaking as grim grinning ghosts come out to socialize, but that’s not all, because one of the most iconic parts of this attraction is the singing busts in the graveyard scene.

But did you know there is more to these friendly busts — including the fact that they each have names, and one has an interesting connection to Tony the Tiger!

Rolo Rumkin is a nod to Disney Imagineer Rolly Crump, who was actually the creator of a concept called The Museum of the Weird. This idea was originally going to be incorporated into the Haunted Mansion, however, it never got built.

Additionally, Rolo Rumkin is the only singing bust who is a tribute to a Disney Imagineer.

The second singing bust is named Uncle Theodore and is voiced by Thurl Ravenscroft. Did you know Ravenscroft was also the voice of Tony the Tiger (the mascot for Kellogg’s Frosted Flakes cereal) and the singer of “You’re a Mean One Mr. Grinch” from How the Grinch Stole Christmas?

Cousin Algernon can be recognized by his famous derby hat! He is the only singing bust not featured in Mystic Manor — Hong Kong Disneyland’s version of Haunted Mansion.

Ned Nub is the only singing bust not wearing a necktie. This is how you will be able to recognize him on your next trip to the Haunted Mansion.

Legend has it that Phineas P. Pock is the cousin of Prudence Pock, a poet whose crypt Guests will see while in line at Disneyland’s Haunted Mansion.

The Haunted Mansion is a popular attraction located in both Walt Disney World in Florida and Disneyland in California.

Did you know this about the singing busts at Haunted Mansion? What about the connection to Tony the Tiger? Let us know in the comments below.